SUBMISSION OF THE SIREN 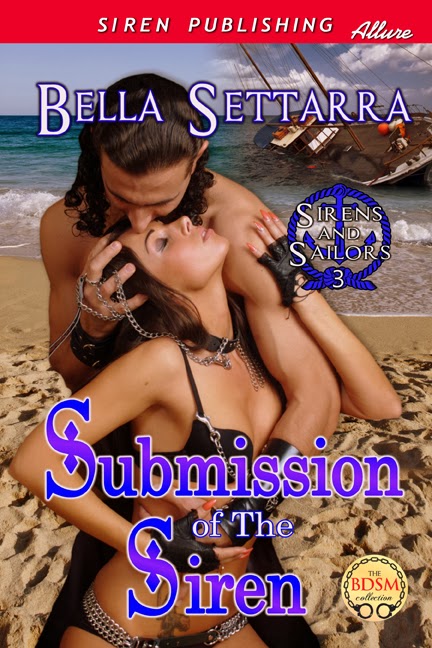 SIRENS AND SAILORS # 3 IS DUE FOR RELEASE

“How did you get on?”  Ligia was excited, though surprised, at the sudden change in her friend.
Kalliope opened her mouth to answer, then looked over at Rechavia, who sat opposite her on the ground.  How had she got on?  He hadn’t said whether he approved or not.
“She did a great job.”  Rechavia grinned, nodding to her.  Kalliope flushed again and sighed with relief.  She looked down, unable to keep her hold on his gorgeous stare.  He chuckled.  She loved that sound, deep in his throat.
“That’s good.”  Ligia chirped on, a little taken aback at the exchange between the couple, but very glad that they seemed to have worked things out.  “I’ll show you how to cook later, if you like.”
Kalliope never thought she would be so grateful, but she was.  “That would be wonderful.”  She found herself looking up at Rechavia for—what—approval?  Maybe.  She was pleased when he nodded anyway.
“What did Eban say?”  Aitan turned to Rechavia as Ligia poured the green tea.
“Some asshole has applied to the People’s Government of Eastland to buy this island.”  Rechavia’s good mood seemed to dwindle as he recalled their conversation.
“Can they do that?”  Aitan asked, astounded.
“Eban’s Dad’s looking into it for us.  Apparently it made front page news, even on Westland.”
“So the press already know about it?  How the Hell did that happen?”  Aitan’s eyes widened.
“I’ve no idea.  There were photographs all over the paper, and an article about the changes we’ve been making to the island.”
“They’re recent photographs then?  Not the ones they took last time?”
Rechavia hadn’t realized that.  “Yep, someone’s taken some very recent pictures, including the fields, the whole landscape and the flowers.  They’ve been very thorough.”
Ligia and Kalliope exchanged a look of horror.
“D-do they know who put the application in?”  Kalliope asked timidly.
“Eban’s going to find out, we hope.”  Rechavia sounded calm but angry.  “The paper just said it was some rich businessman with enterprising new ideas for the place.  Eban reckons if someone’s buying up the whole island it will be to make money on, not to live on.  We’ll all be out of a home soon.”
“That won’t happen,” Aitan assured them, seeing the girls’ looks of dismay.  He shot a look to Rechavia.  Scaremonger!
“You’re right there, bro’,” Rechavia concurred, “we’ll fight this tooth and nail.”
Kalliope wasn’t quite sure what that meant, but it sure didn’t sound good.  A feeling of dread was already building up in her stomach.  It didn’t take a genius to guess who was taking photographs of the island recently, and the wealthy businessman could only be one person.  Rechavia would go mad when he found out!
Ligia got up to clear away the breakfast things, and Kalliope was suddenly aware of Rechavia’s eyes burning into her.  She looked over.  He looked expectantly at her.  What?
He looked at Ligia then back at her.  Oh!
“Let me help,” she got to her feet and took the rest of the dishes from the table.  Ligia looked at her, amazed, and then grinned.  “Thanks,” she said, and showed her where to put the pots.
Kalliope glanced over at Rechavia and got a nod of approval.  Yes!
“Will you show me how to make flatbread?”  Kalliope asked Ligia, loud enough for the others to hear.
Maybe if I keep him happy he won’t be too mad when he finds out who’s behind the takeover!
While the girls were washing the dishes and clearing up, the men set off to work.
“We’ll be in the woodland for a couple of hours, darlin’” Aitan announced, giving Ligia a big hug.  “We’ll come back for lunch.”
“OK.” Ligia promised with a smile, “I’ll have it ready.”
Rechavia kissed Kalliope and gave her a big squeeze before gathering up some tools and marching off towards the woods.
“Oh my God!”  Ligia exclaimed as soon as the men were out of earshot.  “Benat must have taken those pictures.  He asked all sorts of questions about the island.  I never thought, I just told him everything!”
Kalliope, who had automatically felt responsible for the fiasco, suddenly realized that perhaps she wasn’t solely to blame.
“What did he ask you?”
“He was mainly interested in the flowers.  He asked how much they were worth.  I told him I didn’t know exactly, but I knew it was a lot.  Do you think that’s what they want it for?  The flowers?  He did say it was a shame we’d planted so much fruit and vegetables—I don’t know what they expect us to eat!”
“That makes sense if they don’t want us living here.  If they just want to grow the flowers and sell them they could make a lot more room by tearing down our huts.  And if no-one lived here they wouldn’t need to grow food, so they could go back to growing nothing but the flowers here.”  Kalliope’s mind was in a whirl.
“Is Zigor rich?”  Ligia asked.
Kalliope thought for a moment.  She knew damn well he was loaded.  His smart clothes, quality beer, lovely food—just the fact that he had managed to take the journey to the island and back two days in a row suggested that he was rich enough to own his own ship.  And what about the things he had told her?  He had a big house.  He was willing to take care of her if she wanted to join him on the mainland…
“Kally?”  Ligia’s voice pulled her from her thoughts.
“Umm, I dunno.  We never really discussed it.”  She lied.
“Well what did you discuss?  He seems to know enough about the island to want to buy it.”
“We…er…didn’t really spend much time talking, if you know what I mean.”   Sometimes it was handy that everyone knew you were a slut!

LOOK OUT FOR THE ADULT EXCERPT NEXT WEEK!