Thanks for stopping by, it's great to have your company!  Today I'm pleased to welcome Suzy Shearer, who has just released a new book, 'Build a Love'. 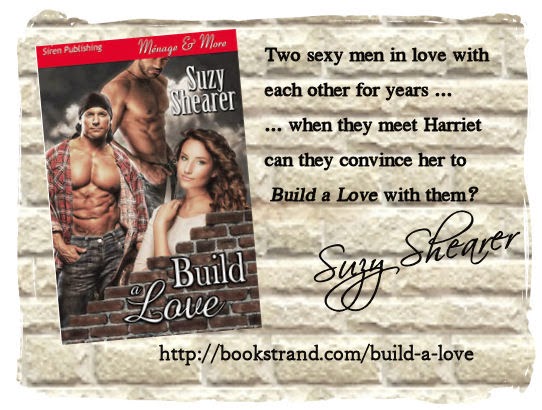 PRINT RELEASE OUT NOW
Vol 1 - The Club (Bound and Uncollared)

Here's the gen on her terrific latest release, and look out for details of how to win a copy at the end, too! 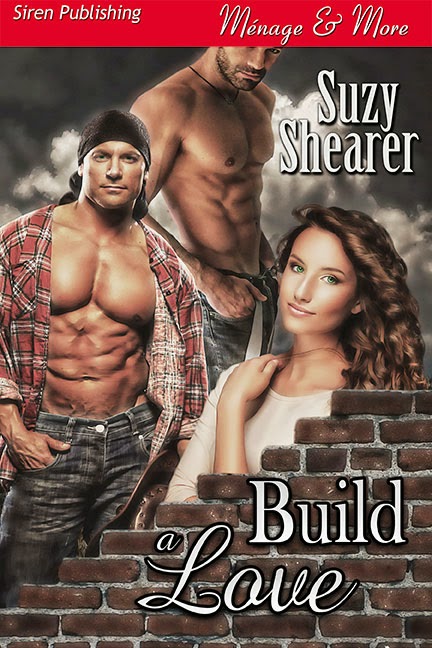 BLURB
Harriet Kempton has spent the last twelve years of her life being an Ice Queen to protect her heart. Stabbed, raped, and left for dead, she can no longer trust any man.
She is shocked when she meets two handsome builders, Bryan Garrett and Marco Campione. Harry feels an instant attraction to them both and wonders if it’s time to take a chance on love again.
But can she get over her past and move on? Even more important—can she accept a relationship with not one but two men? Two men who have a loving sexual relationship with each other but want Harry to complete them.
Harry has a demon to fight if she has any chance of future happiness. Will these men stand alongside her and help her or will her past be too much for them to handle?
Note: This book is written in first-person point of view.
A Siren Erotic Romance

STORY EXCERPT
Great! This was not going well. I went to stand and he held his hand out for me. I did not want to appear rude so I took it. He pulled me up close to him and held onto my hand a little longer than necessary.
“Okay. I’ll just write all this up so it’s clear.”
He looked around for somewhere to sit. The two office chairs were covered in piles of papers, I was trying to move things before the work started. There was a chaise longue that I used, often with my nudes, that was clear except for a cushion so he sat there. Bryan pushed the cushion closer to the end and I gave a start when I saw something purple sticking out.
I groaned softly.
I remembered I had come in here with my friendly rabbit last night. I love lying on the chaise, I was intending to relax and play when the phone had rung and I had tossed it on the chaise. I sent a silent prayer up “please don’t move the cushion again” and tried to look relaxed.
Bryan was writing and had not heard, or took no notice of, my groan. He finished writing and looked up at me.
“Can you check this, please?”
I watched in dismay as he reached for and picked up the cushion, throwing it on the floor. There in all its glory was my purple rabbit.
Please floor, please open and swallow me up!
He looked at the rabbit, then me. Picking it up, he handed it to me.
“You may need this.”
I grabbed it off him and tried to shove it in the drawer of my work desk. Instead, it caught on something and as I tried to jiggle it in the damn thing switched on. The more I tried the worse things got. In the end, I ripped it out of the drawer, turned it off, dashed into the main house and threw it on the counter.
Taking a deep breath to compose myself, I walked back into the studio. He was almost bent double with laughter. I have never been so embarrassed in my life. Bryan looked up at me and tried hard to look professional. I gritted my teeth and asked him if there was anything else he needed from me.
“No, but I’m available if you need anything from me.”
My blush got deeper as I realised what he was offering. He stood and my eyes were drawn to the bulge in his pants. I pulled my eyes upward and saw he was watching me.
I was so flustered, I wanted him out—now! Turning, I led the way through the door. I could feel him behind me. We reached the kitchen, the rabbit sitting there in all its glory. I rushed passed and went to the front door.
“It’s been very interesting meeting you, Ms. Kempton. I’m really looking forward to working with you. I’ll um…I’ll see you on Monday morning about seven-thirty or eight o’clock.”
I cleared my throat and shook his hand. “Thank you, Mr. Garrett.”
The smile on his face was so wicked, I just knew exactly what he was thinking and what his words had meant.
He nodded his head and walked away. I slammed the door and leant against it. Oh hell, that was so embarrassing and, if I was honest, a turn-on.
I walked back to the kitchen. The rabbit looked so innocent lying there. Well I would show it!
I recalled that delightful bulge in the front of Mr. Bryan Garret’s jeans and the sexy glint in his eye. There was no doubt I was attracted to him and unless I was very wrong, he was attracted to me. However, I had no intention of acting on it, there was no way was I getting involved with any man. A quick fuck was all I was interested in and certainly not with someone I would be seeing on a daily basis over the next month or so. But that didn’t stop me from thinking about him. He was so cute and the sort of man that I could learn to quickly love, if I ever allowed myself.
I was leaning against the kitchen counter thinking about him and imagining that bulge. If I closed my eyes, I could still hear his sexy voice asking me if I wanted him to go down. I was rubbing my hands across my boobs, and even through the T-shirt and my bra I could feel my nipples getting hard. With my other hand, I undid and unzipped my jeans.
I would make that rabbit pay for what it did!
I pushed my hand in between my panties and my skin and was just running my fingers between my wet slit when the doorbell rang.
Fuck!
Fumbling, I quickly did the button up on my jeans. I tried to smooth down my T-shirt, my damn nipples were sticking out like headlamps. Moving down the hall, I opened the door to see Bryan Garret.
“Sorry I left my reading glasses in your studio. I wonder…” He stopped and looked down at my nipples, his eyes then dropping lower, and he looked up grinning
I quickly looked down and saw not only were my nipples all but shouting, I had forgotten to zip up the fly on my jeans and it was gaping open. Mr. Sexy Garrett got a good eyeful of my lacy red knickers and bare skin.
I ran my hand across my forehead, tried to act natural as I turned and zipped up my jeans. Leading the way back, I stood in the kitchen as he walked into the studio and picked up his glasses from the chaise longue.
Bryan returned and stood in front of me, his eyes smouldering as he whispered huskily, “I can do a much better job than a piece of plastic.”

Win an ecopy of Build A Love

Wow! We can always rely on Suzy Shearer for some hot, steamy romance!  Thanks so much for being my guest today, Suzy, and good luck with your new book.

Thanks to you, too, reader, for joining us - and good luck with winning a copy of Suzy's book!