I'm really excited today to invite a very good friend of mine, Jennifer Denys, to my blog with her latest release.

An Englishwoman through and through, she lives in a beautiful historical city and is game to try most things once. She’s had a tattoo done on her calf, flew down zip wires 100 feet up in the trees, and was photographed nude by a professional photographer. All of which have taken place since she turned 50!

Many of her experiences end up in her books… but you will have to read them to find out what! 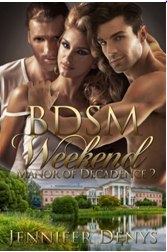 Why set your story in an English country manor?

*laugh* Do you realise how many double entendres you can get from an English stately homes? In my story a riding crop is used in the stables – but not on the horses! A private tutorial is undertaken in the ‘Master’s Study’. A swing in the garden is part of a group activity – but there are no children in sight. And a fabulous ball takes place in the ballroom – with the emphasis on a different type of ‘balls’, to name but a few.

Are you going to do more stories set in Lindsey Park Manor?

Oh yes, as there is a secondary story that is going to ‘arc’ throughout the rest of the series – but I can’t say any more as it relates to a surprise discovery by the main characters in the first book.

Is it a real stately home?

Nope, just based on every one I’ve ever visited (and I watched Downton Abbey VERY closely in the last series!).But it is set in Lincolnshire and called Lindsey Park Manor after the districts of East and West Lindsey in that county. I looked at a map and found a nice big common/forested area in one of those areas and used that as the grounds for the estate.

There’s a map in the front of the book – tell me about it.

I drew it to help me when I was writing the story – and had great fun thinking about what buildings there were likely to be around a manorial estate. When Luminosity Publishing accepted my story, I asked if it was possible to include the map in the book to enhance the story and help the reader as the characters made their way around the estate. I was delighted when they said yes – and they did a wonderful job with my original drawing.

Is this your first story set in England?

No – the first book in this series ‘Kink After Dinner’ was written as a short taster story for this series (Manor of Decadence) and, although it isn’t set in the Manor, it has several references to what takes place there.

What else have you got planned for future stories at Lindsey Park Manor?

Hanging from the laundry racks, role play in the servants’ quarters, feather play in the aviary, bondage from a four poster bed, spanking over a sawhorse in the carpenter’s workshop… oh, were you asking about the plot?

*wink* you’ll have to wait and see!

Thank you so much, Jennifer - it looks HOT! Thanks to you too, reader, for joining us today. I hope you've enjoyed a glimpse of Jennifer's new release.