I'm thrilled to welcome Mackenzie Williams back to my blog today with her latest release, The Orchard: Command Me, which releases TODAY! 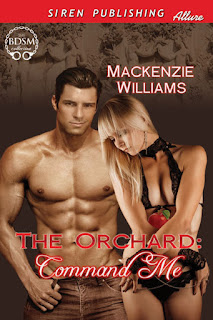 Blurb:
Emerald has always had trouble controlling her anger. Her problem isn't getting any better now that she has a boss and a coworker who seem determined to make her life hell. She turns some of her pent-up stress toward enjoying play at The Orchard, a BDSM club. A few times, however, her anger gets the best of her. Will the Doms make her leave the club for good? When she meets Master Roman, she hopes he'll see the real person she is inside.
Master Roman instantly recognizes Emerald's problem with anger. He has his own abusive past at the hands of angry women. Master Roman believes she needs a strict and tough Dom, but he's not sure he can trust himself with her. Can he get past his demons to help her? Can she, in return, help him with those inner demons?

Adult Excerpt:
The butterfly toy still buzzed against her begging clit. Emerald squeezed her pussy muscles together, and a deep tingle ran through her. The need to come was so great that she could think of nothing or no one else.
“No.” The word rushed from her with no thought.
“Excuse me?” Master Lucas stepped closer to her. “I don’t think I heard you correctly.”
“Master Lucas, let me take over from here. My pet seems to be near gone.”
Emerald’s body tensed at his tone. Before she could regret her actions, she heard her Dom moving his punishment device through the air. Master Roman was spinning it quickly. The sound of the strands of leather whipping through the air caused her to clench her pussy muscles again.
Em held her breath. The air from the spinning flogger cooled the heated skin of her ass. The anticipation was almost thick enough to choke her. Her eyes then moved to the Dom that had been touching himself earlier. He smirked at her and then made a kissing motion with his lips while never stopping his self-stroking.
“Now, pet. It seems as if your mind doesn’t want to play any longer. Let’s see if your ass still does.”
With that, Master Roman neared with the flogger still spinning. She exhaled, trying to calm herself. It didn’t work. Suddenly then she felt it. The flogger just barely skimmed her ass. The experienced Dom kept it spinning as he moved it down her thigh. The leather strands were lightly hitting her in a fast downward motion. It didn’t stay light for long, however. Emerald whimpered as the flogger struck her ass harder, still spinning. It felt like a human car wash, minus the soap and water.
Master Roman let the flogger strike her upper thigh harder still, and a loud moan flew from his sub. A few more seconds of the fast moving leather, and Em trembled. That orgasm was closer still.
Just then, Master Roman stepped back from her, taking the flogger away, but she could still hear it moving quickly through the air. After several tense seconds and without warning, the Dom brought it back to her, but this time it struck her bare pussy lips.
Emerald cried out as it hit her sensitive skin over and over. That was all she needed. Her climax spilled from her clit, and she screamed out again. Master Roman continued to strike her but had pulled back just a bit. She whimpered loudly as the butterfly helped her orgasm rush through her.
Suddenly, the flogger stopped moving altogether, and Emerald tried to quiet her moans and her trembling. She was breathing heavily and having quite a bit of trouble not falling off the stool.
“Aaahhh, so beautiful.” Master Roman touched her ass and she winced.
Emerald tried to stand because her legs were starting to cramp.
“No, sweet. We aren’t done yet.”
She whimpered. Her Dom’s deep voice had her next orgasm building already. Emerald tried to readjust her chest on the hard stool. She tried not to look out at the Masters before her because she knew that it wouldn’t do anything to help calm her.
She lifted herself off the stool just an inch so she could get more comfortable, but her Dom had other ideas. In the split second that she was off the stool, Master Roman reached down and unhooked her bra top. Emerald gasped as it popped open immediately, letting her large breasts bounce free.
“There. I believe the audience wanted to see that.” Master Roman ran his warm hand down her back.
Emerald couldn’t stop from shaking as goose bumps broke out on her arms. Her bra lay limply under her. In this odd position, her tits were shoved up uncomfortably. Screw it. Em moved forward, letting her breasts hang off the edge of the stool. She ignored the few whistles that came from the men.
Master Roman leaned down to whisper in her ear. Another shiver ran over her as his warm breath licked her neck.
“Sub, we are almost done here. We’ve taken the stage for too long. I know how I want this to end. Do you know your safe word still?”
“Core, Sir.” Her response was automatic.
“Good girl.”
Master Roman stood up and stepped back from her, now addressing the audience. “Men, I will finish off my slave. I can see some of you are getting restless for your turn.” He returned to standing behind her. “Master Lucas, hand me the second one.”
Instant panic mixed with her need to be fucked. Both flared in her stomach. Em was having trouble slowing her breathing as Master Lucas returned to Master Roman holding a second flogger. It matched the first one, beautiful and threatening.

Wow - this looks fantastic! Thanks so much for joining me today, Mackenzie, and Happy Release Day!
Thanks to you, the reader, for stopping by today. I hope you've enjoyed a taste of Mackenzie's latest release. Please feel free to leave a comment below - we'd love to hear what you think!