'In the Beginning' by Flora McGregor

Today it's my great pleasure to welcome the very talented Flora McGregor/Clair de Lune, who has a new release out TODAY! First let's find out a little about her...


Q: How did you come to write this story?
A: I was talking to Sage Marlowe about wolf shifters when the idea for this series came to me. I sat down to plot it, and then it took over and I began to write.

Q: What do you like most about the new series?
A: I have read a lot of Sci-fi and Fantasy, and I loved creating the new world. I had a lot of fun thinking about the characters and their roles, and researching the names.

Q: Why do you have a new pen name?
A: This is a new genre for me, unlike most of my other books, so I decided it would be appropriate to let Flora McGregor do the writing. She will handle the Highland Wolves Series, but Clair de Lune will carry on writing.

Q: So what’s next ?
A: Prometheus in Chains will soon have another story, and Angel in Hell has a second book, at present with Siren. Highland Wolves has a second story, also plotted.

Author bio:
I live in Dumfries and Galloway in Southern Scotland, although I was born in South Yorkshire. I spent many happy years teaching, and when I retired, I became bored with just the domestic routine. My youngest son challenged me to write a novel of my own, and I wrote Initiation, book one in the Prometheus in Chains series. I don't think it was quite the sort of book he had in mind, but all my family have been very supportive and encouraged me to carry on writing. Writing has become an important part of my life. It’s been like a roller-coaster ride, and a very pleasurable one at that. When I sent off my first book to Siren, I had no idea what I was setting in motion. I joined Facebook, something I never dreamed I’d do, but I have made many good friends on there, some readers and some fellow authors. Writing has certainly changed my life.
Siren Publishing http://www.bookstrand.com/flora-mcgregor
http://www.bookstrand.com/book/in-the-beginning
Email: FloraMcGregor1746@yahoo.com 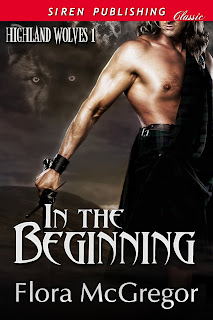 In the Beginning. Highland Wolves series no 1
Blurb:
Erotic romance or erotica with explicit sex scenes containing adult language leaving little or nothing to the imagination. Sex in wolf form, public exhibition
In the beginning the Goddess, Luna, honoured four wolf shifter packs with her favour. To protect them against the hunters, Luna moved her four packs deeper into the Cairngorm range. There the settlements flourished.
Balvaird leads the Brodie pack, and he's worked hard to re-establish order since he took over. Now it's time for him to find a mate. When Morag wanders onto his territory she leads him a dance and sparks fly, but it's clear they are destined for each other.
So what can possibly go wrong? One rogue shifter is determined to have Morag for himself, but can he succeed against the will of the Goddess?

Thank you so much for being my guest today, and the best of luck with your new release. I'd also like to thank you, the reader, for your company - I hope you will stop by again soon.