I hope you're coping okay in this mad world we're living in right now. I know it's affected us all in different ways, and wish you nothing but the best as you negotiate your own way through it.

I've spent some time during lockdown re-evaluating my books; some I've taken off sale altogether, some I'm re-vamping, others I'm planning to re-release when I've finished or, at least, continued the series.

One series I've taken stock of is The Men of Moone Mountain. This was originally published by Etopia Press but I have seen retrieved the publishing rights and decided to self-publish it myself. This way I can offer it FREE to Kindle Unlimited users and keep the cost of the book lower than was previously possible. It also gave me the opportunity to choose my own cover artist and decide on the artwork for my own covers.

I hope you'll agree that the new cover for the first book of the series, Menage on Moone Mountain is beautiful. The book is now available here and I'd love to know what you think. Here's a little about it: 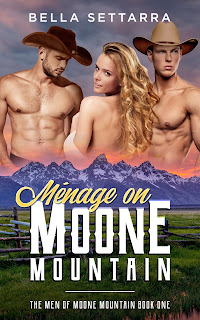 MMF Steamy Romance
For a couple of bisexual dominants like Travis Beaumont and Kent Freeman, the idea of finding a woman to join their family seems highly unlikely, especially having had their hearts broken in the past. So when Travis discovers a beautiful girl unconscious in a ravine during a storm, he can’t help but get his hopes up. Kent, however, is skeptical.
Brooke can’t help falling for the handsome cowboys who save her after a riding accident but daren’t confess who she really is or why she is in town. When she overhears that they have discovered the welts and bruises on her body, she feels violated, and seeing Kent wield a single tail whip terrifies her. Knowing she can’t possibly have a future with the guys she moves on but is forced to stay in the local hotel while the storm blows itself out.
When the local billionaire asks Brooke out for a date, the cowboys are devastated, especially as they realize they have probably blown their chances. How can they possibly compete with the handsome guy with more money than sense?
It seems like the last straw for Brooke when it is later disclosed that Kent Freeman is the local Deputy Sheriff, especially when she discovers that he has found out about her past and the real reason she is on the run. Can she ever trust the two guys again?

And when disaster strikes at the ranch, how can they ever stop her from leaving town?

The series can be read as standalone novels, with the various characters having their own stories and then re-appearing in subsequent books.

Book 2 in the series, Red-Light Wrangler, an MM romance, is already available on pre-order by using this button: Pre-order

Many thanks for stopping by today, I hope to see you again soon.