An Interview With Jennifer Denys...

Today I’ve got my first ever guest to my blog, a lady who is not only a lovely friend but also a brilliant writer, Jennifer Denys.

It’s lovely to have you with me, Jennifer, please can
you tell my readers a little more about yourself?

Thank you for having me, Bella. An Englishwoman
through and through, I live in a beautiful historical city
in England. I have been writing just over two years and
have twelve books published with two publishers,
mostly novellas.
I post to my blog three times a week to keep readers
up-to-date on forthcoming books and writing in general. Do email me as I would love to hear from fans. http://jenniferdenys.blogspot.com/

I love your latest book, ‘Retraining the Dom’, and would highly recommend it. For those who haven’t read it yet can you tell us a bit about it?

‘Retraining the Dom’ is the second in the retraining series. I 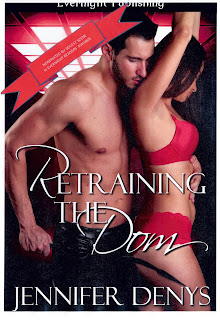 In RTD Trey must go on the retraining program for Doms, at
Club Allure. However, he is much too strong a Dom to let
anyone else order him around. The owner of the club comes up
with the idea of asking an older and extremely experienced
Domme to retrain Trey, and try to understand his hidden past.
Unlike the Dom, Olivia sticks to the rules, and is also very
imposing physically. What no-one knows is that Olivia is a sub
at heart, but through circumstances became a Domme. She
has to try to stop Trey topping her, but he is everything she ever wanted in a Dom and a
man, except too many years have passed. Meanwhile, Trey finds himself having fun with a
woman for the first time ever and gradually recognizes the sub in Olivia. But when Dom
challenges Domme, who will win?

It is available to buy now from:

What are you working on at the moment?

I love the comedy in your books!

What made you choose this genre for your writing?

Wow – can’t wait to see what that one involves!

What do your family and friends think of your writing?

Haha! I have very little family left, just two nieces who are not much younger than me and

I have always regarded them as the same generation as me. However, when I told them

about my writing their comment was, “You’re my auntie. My mother’s sister. I don’t want to

think about you having sex……”

Non-writing friends are mixed from, “When are you going to write a real book?” to, “You

dark horse, I never thought it off you.”

You work for publishers in the US and Canada, does that lead to any problems with editing?

Oh yes! I have to set my manuscript to US English so that it picks up all the Americanized

spelling without me having to think about it, eg, color without a U, realize with a Z instead

of an S. However, I do get caught out with idioms. For instance, one editor picked me up

on the use of the word ‘scarpered’ as in ‘she fled, ran away’. They argued that scarpered

is not commonly known outside of British English. But it is a VERY descriptive word! I

used ‘fled’ but it didn’t have the same sense of urgency!!

Do you write about real places or is it all fictitious?

are around the world can imagine the hero/heroine in their own country. However, I do

throw in my own experiences. There is a hot tub scene in RTD……

Do you prefer to write a series or stand-alone books? Why?

Stand-alone books are easier to write, but series sell better! If a reader likes a book in a
series they eagerly wait for the next one or, if they have picked up a later book, they will go
back and buy an earlier one. BUT, writing later books in a series can be hard if you haven’t
already planned a series from the start. You might have millions of ideas but none of them
fit the framework of that series.

I had to laugh at this one as I put a little bit of myself in all my heroines. It is easier to write
about the heroine’s feelings, emotions, experiences, etc, if they have happened to you. It
is more difficult to have a character that is the opposite to you as it is hard to know what
motivates them in that instance. In the case of Olivia in RTD she is nearly the same age as
me. This is the oldest character I have ever written and I particularly wanted to show that
middle-aged women can enjoy BDSM as well as youngsters.

I absolutely agree – so refreshing to see a slightly older character as the heroine!

Here’s a short excerpt from the brilliant ‘Retraining the Dom’

The sound of a voice penetrated his daydream. It was Olivia repeating her question. “Sorry.”

Sean explained further at her questioning look. “Didn’t you hear about the incident the other night?”

Olivia shook her head. “Trey totally lost it. He was punishing his sub and went hell for leather

at her, swearing, calling her all sorts of names. We had to pull him off before he did permanent

“Respect works both ways. Yes, a sub has to respect her Dom, but he has to return it. That’s

the problem with Trey. He doesn’t care about his subs, neither their physical well-being nor their

“Good luck telling him this.” Olivia’s misgiving was obvious.

Sean harrumphed and shifted in his seat trying to ease the tension in his shoulders.

Olivia frowned. “What are the options if he doesn’t go through with the Program?” She

answered her own question. “I guess he has to leave, and that will affect his reputation in the

community, so no-one will want to sub with him again, if another club will let him in, that is.”

“That’s the crux of it. He could advertise for a sub, but chances are any reputable sites

won’t take his advert. Of course, there are the less-than-desirable sites. I worry that he’ll take a sub

on privately and get carried away with no-one around to stop him. At least here we can keep an eye

Leaning back against the counter of the bar, Olivia replaced a clip to restrain a wayward

curl. She always kept her long, dark hair tied back neatly giving her a severe look. “How about a

warning to see if that will curb his excesses?”

“Hmm.” She made a face. “Well, I know the air would turn blue if you tried putting a

Master in charge of Trey’s retraining, if not murder committed on the premises.” She laughed at the

image she had conjured up.

“Yup. Try telling me something new. Or even better come up with a solution.” Sean could

hear the desperation in his own voice.

Olivia was silent for a few moments as she seemed to think through the dilemma. “Okay,

how about teaming him with someone physically strong enough that he will think twice, like

Mike?” A wrestler by profession, Mike was built like a brick wall.

A few more seconds went by, and then she said, “Here’s another idea. How about a

using female, one of the Mistresses, but a resilient one? One he can’t dominate even if she is a

Sean stared at Olivia in astonishment. She wasn’t looking at him, but he knew that was

exactly what he needed. “That is absolutely brilliant! And I’ve got just the person in mind.”

She swiveled her head around to look at him. “Who?”

He grinned at her. “So what are you doing at this moment?”

Thank you so much, Jennifer, for being my guest today, it’s been lovely having you here.

I'd like to wish all my readers a very Merry Christmas and an extremely Happy New Year!~