My guest today is the lovely Solara Gordon.  Let’s find out all about her.

Hi, Solara Gordon here.   I love and live with my partner of 16 years in the Metro DC area. What started out as a bi-coastal romance soon settled on one coast.

A vivid imagination keeps me busy creating my next fascinating romance. I enjoy creating unique characters and watching their journeys unfold. “Love freely given multiplies and will return endlessly” is a key aspect of my stories. Add in alternative lifestyles and my love for the paranormal, and the uncommon becomes the norm in many of my stories.


Q. What inspires you?

A. Many things can and do. A line from a song, or a newspaper headline can start the what if questions flowing. Sometimes it’s a simple comment in passing that peaks an interest and gets me to thinking about what someone would do in similar circumstances or different ones.


Q. How long have you been writing?


A. Often and on since I was a child. I remember writing multipage stories in grade school and coming up with elaborate plots. It wasn’t until I reached my 30’s, I realized writing and telling stories is an integral part of my persona.


Q. Who is your favorite author?

A. I have several. I love the complex layering and first person format of Laurell K. Hamilton. Kate Douglas is another with her portrayal of alternative lifestyles and paranormal mix that intrigues me as well. Alyssa Day, Jade Lee, and Rebecca Zanetti round out the top tier. I enjoy reading a well written story, whether it’s sweet, sensual, or dark and gritty.


Q. What are you currently working on?


Q.  For how long have you been a published writer?
A.  My first book came out with Siren-Bookstrand in 2010.

Q.  How many books have you written?
A.  Five all together.  Four are published.  The first is hidden away needing a major rewrite.  I learned a lot writing my first book.

Q.  What are you working on at the moment?
A.  Several different items as my muse samples her next item to dig into.  I’ve got a good start on book 3 of my Cascade Bay series.  Another ménage story in the works.

Q.  Sum up your writing in three words.
A.  Spicy, Hot, and Loving 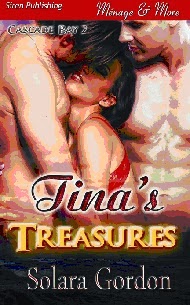 
Tina couldn’t resist either’s infectious smile and wit. Neither one acted as though they had a vain bone in them. Each spoke with confidence and appeared at ease with themselves as well as the night’s festivities. Tina wondered about their and Rodger’s friendship. Prior idle chatter about themselves revealed some of how connected they were. Before she let her guard down any more, Tina wanted to know if anyone else was keeping score for the dragoness and the old bat.
“Aunt Helen? I didn’t know any of Rodger’s other groomsmen were related to him.” Tina picked up her roll and tore a piece off. As she popped the piece into her mouth, Drake angled his chair toward her. He pushed his plates away from him.
“Only one of Rodger’s attendants is a blood relative. His choices caused a nasty battle between his mother, grandmother, and him.” Drake leaned back in his chair, picked up his wine glass, and drank. “Jon and I are the closest to family he allowed otherwise. The rest are old friends.”
Drake paused in his conversation as servers reached between them to clear plates. Coffee cups and saucers appeared next with silver coffee pots. Cream pitchers and sugar bowls came next. Each table received a duplicate set up.
Tina held on to her seltzer drink until the table was cleared and the servers moved on. Setting her glass down, she glanced at Jon. “Care to elaborate on Drake’s reply?”
Jon copied Drake’s action, angling his chair so he faced her as well. He sipped his wine twice before he answered.
“Neither Drake nor I are related to Rodger. We’re high school friends who attended the same college. My family lives four hours away. Drake’s in another state.” Jon sat his glass down. “We figure we spent enough time here as cousins would, so Mrs. Daniels became Aunt Helen. The mother hen neither of us wanted or needed.”
Tina quickly sat her glass down, swallowing to keep from spitting her mouthful all over her. Jon’s description of the head dragoness couldn’t be more spot-on. She wondered if Rodger knew what astute friends he had. Tina smiled as she turned her coffee cup over. She reached for the pot close to her.
Drake stayed her hand. “That’s decaf. Is that what you want?” He pointed to another pot close to Jon’s elbow. “That’s the real stuff. Both are vile to me. I asked for tea.”
Tina slid her hand down Drake’s arm until her hand covered what she could of his. She heard movement from Jon’s side. Lord, were the two trying to outdo each other? Tina lowered her lashes and tried to sneak a sideways look to see what Jon was up to.
Warm breath caressed her ear and neck as Jon spoke. “Maybe a cup of half each is what you prefer. Which one gets the bottom and which one gets the top?”
Tina gulped, unable to get her tongue to move as images of Drake and Jon sandwiching her between them flickered to life and dimmed as rapidly as they formed. She blinked, hoping to catch the last one for later on as she drifted asleep, sated from breaking in her new vibrator. At least her dreams wouldn’t be so cold and lonely.
Before Tina could reply, a throat cleared in front of them. Tina looked up. Merde! The old bat stood there glaring at them. Tina swore Mrs. Addams’s eyes moved over Drake and Jon as though she was sizing up how to skin them and offer them up as steak tartar for the evening snack post cake-and-coffee course.
Drake entwined his fingers with Tina’s. He smiled, placed his napkin on the table, and leaned forward. “Yes, Grandmother Addams.”
Jon laid his napkin on the table and stood. “Do you need help Ma’am?”
Tina bit the inside of her bottom lip to keep from chortling. Mrs. Addams nodded, pointed to both Jon and Drake, and walked off. There was a tinge to the old woman’s cheeks that suggested embarrassment or her own memories had ignited a fire that the old bat wasn’t sure how to quell.
Drake raised Tina’s hand to his lips. He slowly worked his fingers free from hers. As his gaze locked with hers, he dragged his fingertips across her palm, scratching lightly as he moved toward her wrist.
Tina clenched her legs and ass as Jon matched Drake’s moves except his fingers trailed down her arm, lingering in the fold her elbow made as she tried to raise her arm. Goose bumps rose from the top of her shoulders, down her arms, and across her chest until they reached her breasts, tightening around her already aching nipples. A deep breathe wouldn’t help. The bra she wore chafed her tingling skin with every breath she took.
How much more she could withstand and not be obvious, she wasn’t sure. As Drake rose, Tina looked around him. Janet and Rodger were nowhere in sight. As she looked around the room, breathing as deeply as she could, Tina caught the two pairs of eyes glaring at her, Mrs. Daniels and her daughter. Crap! Double crap! The old bat must have spilled what she thought she saw.

Thank you, Solara, for a great interview.   I wish you the best of luck with your future projects, and look forward to seeing you again soon.