Today I am pleased to introduce K.D. Austin as my guest on 'Meet the Author'.

Getting to know you; 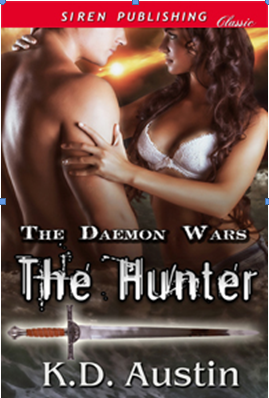 Blurb: Bound by an ancient prophecy, Lace Hardin must find the Seraph, the man whom she is destined to bond so they can rid the world of daemons. When sexy musician, Anders Engel, rescues her from a daemon ambush, though, Lace must decide whether to follow the prophecy or her heart.
After defeating Daemon Lord Belial’s personal guard, Lace gives into her desire for Anders and discovers a new world of pleasure. However, when Lace learns that Anders is a daemon, she fears he’s been sent by Belial to destroy the prophecy. As Lace and Anders are pursued by daemons, can Anders prove his true feelings for Lace and convince her he’s forsaken the daemon’s evil ways? And with no sign of the Seraph, is there any hope for Lace to destroy the daemons, or will she fail in both love and her destiny?

Leaning forward just enough to peer through the window, Lace Hardin placed the barrel of her Colt .45 into the knothole she had bored into the windowsill earlier. She had spent all her savings on the ancient weapon two months ago, but it had proved worth every bit of gold and more. She fired two rounds into the room in rapid succession, and as the last found its mark, she swung the window open and landed in the room to face an ashen man sitting behind a table. At least he looked like a man, but Lace knew better.
“Damn,” she said.
She took in the scene quickly and realized how she’d made such a potentially deadly mistake. The room, a seedy little bar that had closed hours ago to what few humans would actually frequent it, had only one other door. It should lead to the other reason she’d come here. The large wall-size mirror behind the bar to her right had come loose at some point in the past and did not reflect the back corner of the room where the not-man sat.
“You’ll be damned, Daemon Hunter,” the man who wasn’t a man said.
Stupid mistake, Lace thought in the second she had to think before reaction took over.
In a flash, the table flew across the room at Lace. She dodged and simultaneously fired at her attacker. The shot missed high, blowing a hole in the wall. The table flew over the bar and shattered the mirror.
“Looks like your luck finally ran out,” the snarling daemon said, whipping a vicious blade from the sheath at his side. Now that the table no longer hid him, Lace couldn’t even mistake this creature for a man. Though his head and shoulders were man-like, if a little too orange, scales started on his chest and flowed into a large serpent body that curled around itself like a rattlesnake.
His eyes scanned the carnage in the room. The other two daemons who had occupied the space had been reduced to ashes by Lace’s first two shots. Thanks to the askew mirror, she hadn’t been able to see the snake from the window. She feared it might be right. Her luck may have just ended.
With startling speed, the daemon shot across the room, swinging the three-foot blade at her chest. Lace dropped flat on her face. The sword whistled above her, catching a bit of her raven hair that didn’t fall fast enough. She rolled left, guessing correctly, and just missed being impaled as the daemon thrust down. His blade stuck in the well-polished oak floor.
“Looks like it’s your luck that’s run out,” Lace said, blasting the daemon from near point-bank range as it struggled to free the sword. The daemon exploded like an erupting volcano, covering Lace in ashes. She collapsed on the floor and tried not to vomit.
“That was too close,” she said aloud, just to hear her own voice. The gun allowed her to remove the curse of daemons from the world, at least temporarily, but it had made her overconfident. Tonight that had almost killed her. For the past several years, she’d had to plan carefully how to ambush the evil creatures, so as to kill them before they killed her. She had relied on elaborate traps and plans. Since she’d acquired the gun, though, she’d allowed herself to plan less. The Colt removed the need for some of her planning, but not all of it. It wasn’t a mistake she intended to repeat. In fact, she probably wouldn’t survive another error like tonight’s.
She stood up, furiously brushing the dusty remains off her black leather pants and jacket, and stepped through the far door.
“Bingo!”
Against the back wall of the five-by-five room stood a desk with a flat piece of black glass attached to a brushed metal stand. Beneath the glass on the desk sat a thin sheet of metal with human letters and numbers on it, though they weren’t in alphabetical order. It was just as the lesser daemon she’d briefly detained in the town of Rustville described it. Though it looked nothing like she’d imagined or like any of the crude drawings she’d ever seen, Lace guessed this was the computer that the daemon had told her about unwillingly. For some reason he had believed Lace wanted it, but she couldn’t imagine how the piece of junk could have ever been useful. However, what lay next to it caught Lace’s attention. This is what she’d come here for. A book!
A boot scuffed behind her.

Lace ran her hands down Anders’s back, feeling the broad muscles bunch as he supported himself above her. Her hands traced the lines of two thick scars, one on each shoulder blade. Though she was curious, she had no desire to ask now. She reached his belt and slipped her hands around to his front. She began unbuckling.
“I want you in me.”
His jeans unclasped easily under her fingers, and she worked them off his strong legs. Raising her head so she could admire his unleashed cock, her breath caught. Ten thick inches protruded from between Anders’s legs. She’d never imagined a cock could be so long and so thick. She could see how quick his pulse throbbed as his cock vibrated up and down above her body.
“Oh my,” she said, and her hand wrapped around the shaft. Anders’s eyes rolled back in his head. Her hand barely reached all the way around his thickness. Only her fingertips met. She wanted to feel his cock inside her even though she was a little scared of how big he was.
Using her hand, she guided him toward her dripping pussy. When his head pressed against her lips, Lace almost came again, the sensation and her expectation rising. Anders pushed firmly, and the massive head spread her lips open and began sliding inside.
Lace bit her lip and cried out.
“You okay?” Anders’s face hovered only centimeters from hers. Lace reached up, tangled her fingers in his golden hair, and pulled his face to hers, closing the slight distance and locking their lips together. As their kisses began, she raised her hips and his cock moved deeper inside her. She felt she’d split in two and explode with pleasure at the same time
“Oh yes!” Lace pulled Anders’s head back and pushed her hips toward him. Anders matched the motion and suddenly his entire cock filled her pussy. She cried out.
“Fuck me, Anders! Fuck me now!” She had never wanted anything more in her life than she wanted him right now. Nothing else in her life mattered. Nothing else in the world mattered. This was everything.
Anders slid his cock slowly back and pushed it in again. Lace ran her fingers down his back, pressing the tips of her fingers hard into his flesh as he pushed his cock back in.
“Harder. Fuck me harder. I want you to make me scream.” Lace had fully surrendered to her body. There was no more thought, only action. She needed this. She needed it badly.
Anders increased his rhythm. Each thrust stretched Lace’s pussy and caused her to catch her breath. He began ramming his cock into her hard. Their hips slapped together. She panted and kissed his face, neck, and shoulders. Then she matched his rhythm with her own and now the entire bed rose and fell with their motion, creaking and screeching.
“Fuck yeah. Fuck me, Anders. Harder! Faster!”
His cock pounded her pussy. Lace bucked up to meet it every time.
“Yes! Harder!”
Sweat streamed down Anders’s back and Lace felt her own sweat rolling into her hair and between her breasts. Then Anders stopped and pulled back until only his head remained inside her. She gasped at the sudden cessation of sensation. His hands grabbed her hips and flipped her over. He pulled her to her knees as he rose to his behind her.
“What are you—?” Lace cut off as Anders pushed his cock back into her pussy hard. “Oh yes! That feels so good.” She’d thought she’d felt all there was to fucking before, but this was something else entirely.
His cock hit the front wall inside her. Each thrust felt like it might punch right through her, but Lace wanted more. Needed more. She’d never imagined sex would be this good. Her fantasies had not prepared her for this glorious experience.

Connect with me online:

Thank you so much for being my guest today, K.D.

Join me again on Monday to find out what's happening in Bella's World. Until then have a great weekend and enjoy whatever you are reading and/or writing.