Today my guest for Meet the Author is Peyton Brittany Clarke.  Let's find out all about her.


Getting to know you;

·         Who would be your perfect hero/heroine?
·         A mixture between Captain America/Steve Rogers, Tony Stark/Iron Man and Bruce Wayne/Batman with a bit of Clark Kent/Superman mixed in for emotional tenderness.

·         What are your aspirations?
I really would like to continue to write and build a fandom of readers who would be willing to explore all the stories floating around in my dreams.

·         Do you have any hobbies (excluding writing)?
I love gardening.  Especially roses taking care of my perennials.

·         For how long have you been a published writer?
A little under a month (as of me answering these questions).

·         How many books have you written?
Now that's a tricky question.  As of right now I have only one published but I have several on my computer waiting to be set free!

·         What kind of books do you like to read/who is your favourite author?
I'm kind of a one track mind sort of girl.  I love all sorts of romance novels.  My favorite authors are Sophie Oak, Diane Leyne and Stormy Glenn

·         What are you working on at the moment?
I'm working on the next book in the Ferae series plus a new scifi romance series.
·         Sum up your writing in three words.
Easy, Hot, Passionate

·         What inspired you to start writing?
I read so many great books, my mind kept concocting stories on its own and I had to get them out.

·         How do you cope with distractions when writing?
Grit my teeth and keep going. 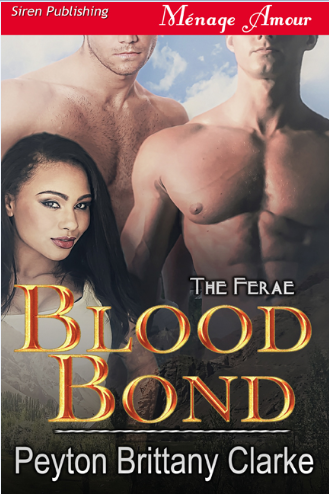 Time is running out for CIA Agent Colton McClain. Caught between two worlds, he must choose—his Ferae side or human; he can’t have both. Haunted by his own failures and his family's past, Colton refuses to follow their same path. His wife Lizzie and his husband Jarrod are caught in the middle. Threatened by the townspeople for having a marriage with two alpha males instead of the traditional alpha and beta, the clock is ticking on how long they can live together as a family. Add on the fact that one of them gets the Rut because of their unconventional relationship, all bets are off that they will maintain the happiness they so desire. But their love is strong; still, can it defeat Colton’s fears? He is the key. Now he must act.

After having dropped Brody off with his parents, Lizzie was finally able to go home and prepare her husbands’ dinner. She sat down on the sofa in the family room and watched as her men as they ate their dinner and played their wretched video game. Not particularly hungry, she took small bites as she watched them hassle each other over their tactics.

“Hahaha! The cops are after you,” Jarrod mocked. He wore his baseball cap backward, causing a tendril of sandy blond hair to hang out of its side. Lean and muscular with a medium frame, his six-foot-two-inch build held no hint to the real physical strength he was able to muster.

Of the two, he was more introspective. Sometimes she often thought it was because he was a rogue. They were naturally quiet and solitary. But Colton was a rogue, too, and he was the exact opposite, at least when it came to the quiet part. A thinker, Jarrod did not move before planning the whole thing out. Unobtrusive, he could be standing beside someone in the room and the person would not even know that he was there, much less hear him come in. He was also the most secretive about what he did outside their home. Whenever she asked, he’d reply that it had nothing to do with their life here.

“Thanks to Jarrod’s wrangling, he messed up all of my stashes,” Colton complained. With hair the color of raw sienna, cut short with small waves tapering toward his neck, hollow, piercing, icy blue eyes, and a body like steel, she gave thanks every day that he was her alpha. A handful nonetheless, he was her handful, and she wouldn’t have it any other way.

“With all that happens in the world today, I would think you’d want to play something less violent.” She rolled her eyes.

“Yes, true, but they don’t make an interesting version of the Care Bears game,” Colton quipped, jerking at the game’s controller.

“Do they have a Divorce Court one?” she asked dryly.

“Not for the Ferae,” Colton replied, not looking up. “Honey, get me a beer?”

Jarrod laughed. “Good one. Baby, get me one too.” He mewled, making a sound reminiscent of a whimper. His was soft, low and endearing making her heart flutter.

The sound was a heartbreaker she could not not resist.

“I’m trying to eat. Why can’t you get it yourselves?” she said, standing up.

She sighed, her heart not allowing her to say no. “I only do this because I love you. Lest you think I support your habit of playing that stupid game, which encourages the worst behavior.”

Lizzie waited for a response but they ignored her, engulfed in the game once again.

She picked up her plate and took it into the kitchen with her.

“Two bottles of beer, coming up,” she said, flipping off the caps of the ice-cold brew. She sniffed it and smiled. It was a local brew. The flowery notes of Calendula struck her nose. The little perennial was one of the few substances that intoxicated their kind, because alcohol on its own, though pleasant tasting, did not.

She heard a chirp and frowned, wondering what it was. She heard it again. It came from behind her. She glanced at her bag. Curious, she reached inside. Picking up her cell phone, she looked at it. She had turned it off in the store, so why was it making noise now? She pressed the button on the side that unlocked it. The battery was dying.

She searched through the junk drawer in the kitchen, pulled out a cord, and plugged it in. She turned it on and saw that she had a text message.

She texted back. Are you sure?

She chewed her bottom lip as she awaited a response. It came soon enough. Yes. Tried everything. The rest is up to you.

A shiver went down her spine. She folded her arms and pressed them tightly against her.

“Where’s our beer?” Colton asked behind her.

“Oh, sorry,” she said, unplugging the cell and placing it back in her purse. She handed him the bottles.

He paused. “Something wrong?”

She escorted him to the front door. Standing inches away from him, she heard his sound breathing.

“I wasn’t even trying hard. Poor baby, are you bored?” she whispered.

He leaned forward and sniffed the crook of her neck, making her spine tingle. His hot breath beaded on her skin. His body oozed with the potency and virility of a powerful alpha male while his spicy scent made her head spin and her mound wet.

“You think you can keep up?” she asked, her breaths jagged.

“I was gonna ask you the same thing.”

His piercing blue eyes constricted as he pulled her to him. His mouth claimed hers in a hot kiss, taking her breath away. Pulling away with a hiss, he nipped at the flesh on her neck and shoulder. Bathed in pleasure, her brain switched off as she pulled off his blazer and tossed it aside. He licked her lips and devoured her mouth as they stumbled over the furniture, peeling away layers of clothing.

Her back slammed against her bedroom door as he pressed his body against hers and traced her lips with his tongue. The more he toyed with her, the harder it was to control the primal desire inside her. If she let loose she knew she would hurt this citified ferae, so tamed by the normal humans in this world.

He grabbed her ass and lifted her, wrapping her legs around his hips, and thrust forward, grinding his hard crotch into her center. She grunted as he thrust again, pushing the breath out of her body.  She unwrapped her legs and pushed him away and then turned him around and climbed onto his back. She wrapped one arm around his neck and the other around his chest and squeezed, swearing in their ancient tongue. She squeezed and squeezed, crushing his solar plexus, releasing all of the hormones for his mating desire. He writhed under her grip, nearly gasping  from  the lover’s embrace. He fell to the floor, causing her to land on her back.

He paused, caught his breath and grinned. “I thought so.” Scooping her up with one arm, he slung her over his shoulder.

Lizzie giggled with a dreamy, awesome pleasure he hadn’t experienced in years.

He tossed her onto the bed and ripped off her panties then spread her legs. He buried her face in her mound and devoured her center. Her ecstasy grew as his tongue darted in and out of her opening. She closed her eyes, trying to hold back the crest that was building to a climax, moaning and writhing from his touch. He unzipped his fly, freeing his thick, meaty cock. His rigid pole stood straight, its tip dripping with pre-cum.

She gasped as he sank into her, filling her completely. She moaned from the pleasure and the pain as he pounded her, causing her to keen with delight. He paused and looked into her eyes, before withdrawing and turning her over. Putting her on all fours, he penetrated once again, grabbing her by the scruff of her hair with one hand and holding her hip with the other.

She grunted with each thrust as his powerful ministration shook her and the bed. It had been a long time since any man had worked this good. He craned her back further, wedging his cock into the surface of her cervix and grinding. She moaned gutturally.

He released her hair and held her still as he nailed her sweet spot over and over again. She wailed her climax, again and again and again. Her arms and legs became weak as he continued to take her from behind. He spread her legs further apart, grunted as he pushed into her again. She came once again, her juices pouring all over him. His seemingly boundless stamina began to drain her.  The muscles in her center grew sore from the pressure of his rock-hard dick.

She knew an alpha of his status could go all night. And she just wasn’t ready. She tightened her mound. He paused and whimpered. He attempted to thrust once again. He didn’t want to come but she was going to make him. It was the only way she could survive the encounter and still being able to walk in the morning.

She tightened her muscles once again and then drew on them, milking him. He panted and contorted his expression in pain. He grew rigid and shrieked. The Taking was working. No ferae male liked or wanted the Taking, but often it was a female’s only defense from such an onslaught.

Thank you so much for being my guest today, Peyton - I can't believe this is your first novel, I'm sure we'll be seeing lots more from you soon.

I hope you all have a great weekend and will join me again on Monday to find out what's happening in Bella's World. Until then have fun and enjoy whatever you are reading and/or writing.