Today sees the release of Dallas at Midnight. This is my 8th book and the second of my Cowboy Romance stories.  Dallas at Midnight is the start of a new series, Midnight in Montana.  I hope you like it.  Please leave me a comment below to let me know what you think.  Thanks for stopping by. 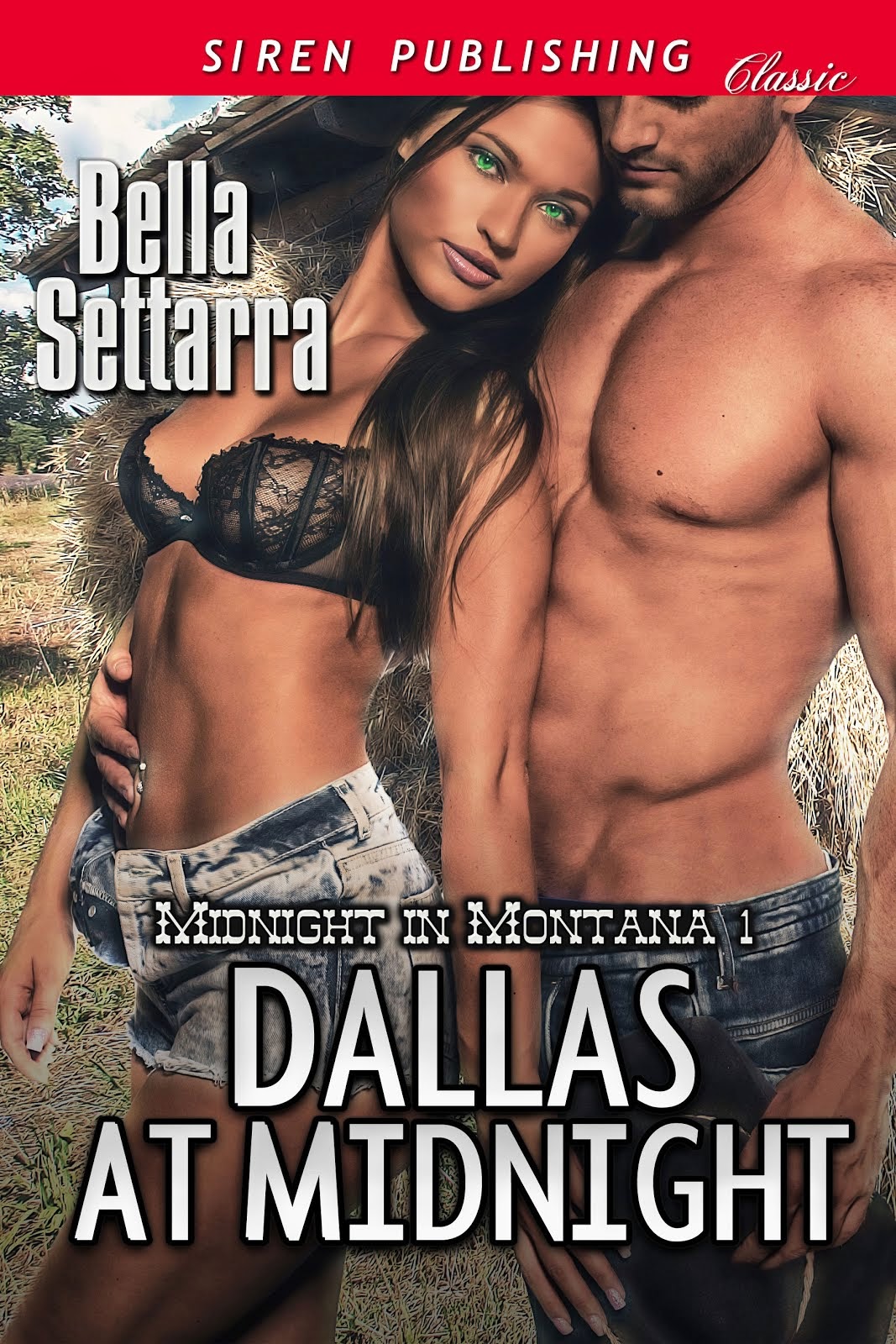 ‘Dallas at Midnight’ by Bella Settarra
She could save his ranch – but can he save her life?

Escaping crooked millionaire, Ed Powell, Dallas Somerville finds herself sleeping rough in a barn in Midnight, Montana.  She falls in love with the owner, near-bankrupt rancher, Shane Patrick.   Shane’s sister-in-law comes up with a way for Dallas to save the ranch – but when Powell catches up with Dallas, Shane first has to save her life...

STORY EXCERPT
“Now I should warn you that I’ve got a gun here and so have the others, so don’t you try anything stupid.” The guy’s southern drawl had gone and in its place was a gruff snarl.
Stupid! That’s me all over. Stupid. Stupid. Stupid!
Two men sprang out from between the trees and their filthy hands reached up for her. Jutting out her chin in defiance she got herself down from the horse and stared at their faces. She didn’t recognize any of them.
“Where’s Ed Powell?” she demanded angrily as they tied her hands together behind her back. They were rough with her and they smelled putrid.
“He’s waiting for you.” One of them hissed in her ear. He wore a filthy, black shirt and smelled of stale beer and cigarettes, among other things.
“Yeah, but we get you first,” the other one murmured, licking his lips.
Oh God! He stood right in front of her and she drew her knee up sharply.
“Bitch!” He yelled as he grabbed his groin and the other guy hauled her into the back of the van.
“So that’s how you wanna play, is it, girly? Well, that’s fine by me. I love a bit of sass. Now get in there!”
He practically threw her into the back. He slammed the door, leaving her in the dank darkness. The van smelled of urine and sweat, and she retched. She could hear the men arguing outside before the van rocked and two doors slammed shut. The engine spluttered into life and they were off.
Dallas was thrown about in the back of the sketchy van as they sped over rough terrain, and she was sure she was receiving bruises all over her body. She was relieved when they finally reached a smooth road, and just prayed that the guy who smelled of beer wasn’t the driver. She could hear them arguing as they sped along, and strained her ears to hear what was being said. All she could make out was one of them was worried about the time as he kept urging the other one to hurry up.
Her mind raced as she recalled the guy’s words “we get you first” and the sickness in her stomach roiled until she found herself vomiting all over the van. As the vehicle jolted violently, she rolled her head into her own sick. Smelling it made it worse, and she threw up again. Somehow, not being able to move her arms seemed to exacerbate the situation and she continued to vomit over and over. At least they won’t want me now! Her head throbbed and she felt utterly dreadful.
An idea occurred to her and she tried to wedge herself against one side of the van, holding onto the metal seam with her fingertips. She still smelled of sick but was now no longer lying in it. Her eyes had become accustomed to the dark and she realized it wasn’t as black as it had seemed when she had first been thrown in. She strained to keep her position as best she could, forcing her feet against the side of the van and hanging on, practically by her fingernails, as she studied her surroundings.
The van was old and rusty, and very basic. It hadn’t been boarded out so the sides were still metal. She saw the lights at the back and wriggled down to them. She was glad she had boots on today, and her anger gave her the added strength needed to break the glass by kicking it. Daylight shone through, and the noise of the rattly old van sounded louder. She could see tarmac on the road and watched desperately until finally another color appeared behind them. It was a red vehicle! Taking a deep breath she thrust her foot into the glass and out through the hole. Her boots only came a short way up her leg, and something sharp cut into her just above the ankle, but she persevered. She hoped the driver would see it, and she wiggled it around, just to prove to him that she was alive. As she kicked her leg the pain stabbed her, but she was almost too angry to pay it any heed. Suddenly the van veered sharply to the left and agony seared through her leg as it was forced deep into the broken glass and sharp plastic. Dallas bit hard on her lip to stop herself from crying out.
She felt sick again, and dizzy. Her head throbbed and she found it hard to think straight. No longer able to kick her leg she just prayed that the driver had seen it and called the police. She found herself on a miserable precipice between consciousness and sleep. Darkness closed in on her for a few moments at a time and then she was awake and suffering again. She didn’t know how long she spent wavering between the two, she only knew that it was too painful to stay awake and too dangerous not to.

ADULT EXCERPT
Shane felt her need as their kiss became more fervent, and wondered if she could feel his massive erection through their clothes. He placed her feet on the floor, feeling her body slide down the length of his. As soon as they broke the kiss he hauled the drenched T-shirt from his body, sighing at the relief. He saw her lick her lips as she took in his hairy chest, and his cock twitched again. This time she was definitely close enough to feel it, and the slight smirk on her face told him that she had. Her gorgeous eyes looked up at his questioningly and she bit her lip. Does she know what that does to me?
He felt desperate for her, but not knowing what she had been through he couldn’t push the situation, so he held back. He didn’t have to wait long. He felt her soft fingers on his fly, and she didn’t take her eyes off his as she pulled at the zip. His cock strained against the denim, which in turn was clinging to his soaked body, and he had to lend her a hand to undo it.
He watched her eyes grow even bigger as his cock sprang free and landed straight into her hand. She gasped, still staring at his face, but obviously feeling the length and girth of his primed member.
“Are you sure?” he whispered softly.
“Oh, yeah.” She looked like there was no doubt in her mind as she tugged at his Levis and he helped her to remove them, glad that he had gone commando today.
With one hand on his cock and the other stroking the hairs on his chest she squeezed herself closer to him. He put his arms back around her, stroking her back and her soaking wet hair. Without a word she slowly took a step back from him and shrugged off the robe, which fell unceremoniously to the floor.
Shane had never seen such a beautiful woman in his life. She was a little more slender than he usually went for, but had a perfect body. Her legs were lithe and shapely, and her breasts were pert. Her stomach was completely flat and her skin as soft as silk. He felt the breath catch in his throat as he drank her in. She seemed comfortable in her own skin, and with good reason.
Her arms came back up around his neck and she licked at the seam of his lips until he granted her access and her soft, hot tongue delved into his waiting mouth, tangling with his own. She pressed her body against his and he felt the softness of her breasts against his chest, as his erection jabbed into her stomach. Her breath was hot and rampant as the kiss developed, and soon they were devouring each other, not just their mouths but their necks, ears, and throats. He felt as though he was floating on air as he kissed the luscious beauty in his arms and felt her hands and tongue exploring him.
Leaning down he kissed her breast, and enjoyed the gasp which escaped her lips as he took her nipple in his hot mouth. She tasted sweet and her nipples puckered immediately under his ministrations. He could feel the heat of her pussy as she rubbed it against his cock and he pressed against her even more as she moaned sexily in his ear.
“I want you,” she whispered huskily.
“Are you sure?”
“God, yes!”
He gently backed her against the wall as his hand found her dripping pussy. He stroked the folds, which parted to welcome him, and he slid first one finger, then two into her burning hole.
“Please,” she gasped, the urgency apparent in her tone.
Her hand came down and he felt her take his throbbing cock and place it at the entrance of her pussy. He watched her face as he slowly entered her, fearful of hurting her and yet desperate to be inside her. Her expression told him all he needed to know, and, after a tentative start, he thrust hard into her.
“Yes!” she screamed.
He thrust again.
“Don’t stop,” she urged.
Shane had one hand on her hip and another stroking her breasts as he hammered into her over and over. With every stroke he felt like he was probing deeper and deeper into her soul, as she welcomed him into her life.
Dallas roared her appreciation, which spurred him on even more. He felt her muscles clench his aching cock as he pounded into her until she screamed his name as her juices exploded around his cock. Taking his cue from her he thrust in one more time before his own seed shot into her body, continuing to spurt as her pussy tightened around him. As he kissed her burning face he felt her hold him even tighter.
“Again,” she whispered. “I’m gonna come again, don’t move.”
Shane felt a burning sensation inside his gut. He had never had this effect on a girl before, but sure enough, he felt her muscles clench once more and she screamed into his chest as her hot juices overflowed and oozed deliciously down his leg.
He felt her nails dig into the flesh of his back and relished the pain. Her body was shaking as he held her close to him, and he felt the remains of her orgasm wrack through her, before she slumped heavily against him.
The water continued to rain over them, cooling their flushed bodies, and washing them clean.
“Thank you,” she whispered in his ear as she held him tight.
Shane grinned. No one had ever thanked him for sex before. Mind you, no one had ever come twice in one go before either. It seemed to be a day for firsts, he thought happily to himself.

Thanks again, reader, for taking the time to check out my new release.  I'd love to know what you think in the comments box below.  Take care,