I'm so excited to announce that 'Menage on Moone Mountain' (The Men of Moone Mountain Book #1) has been nominated for an award in the Cowboy/Western Category of the Menage Romance Fan's Awards 2015. 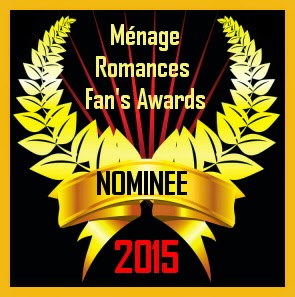 I have never been nominated for anything like this before so am really excited and flattered. It is great to know that the book has been enjoyed by my readers, and I am so grateful to you. I am up against some really big names -  Lori King, Natalie Acres, Stacey Espino and Heather Rainier - so I know my chances of success are really slim, but I am really chuffed to be included in the running with such wonderful authors. If you would like vote for me, however, I would be so grateful - here is the link: https://marymenage.wordpress.com/2015/03/01/nominees-poll-menage-romances-2015-awards/ 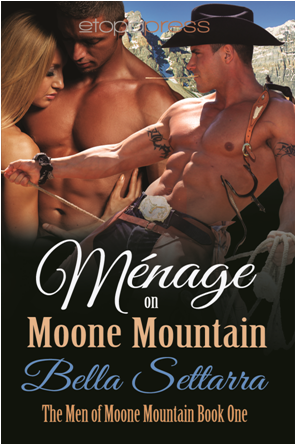 Doms, Travis Beaumont and Kent Freeman, enjoy a loving relationship on Moone Mountain.  When Travis finds a beautiful young girl, calling herself Brooke Adams, unconscious in a ravine, both men fall for her.  Having almost given up on their dream of adding a submissive girl to their 'family' to make a ménage relationship, Kent is primarily skeptical.
Kent's worries increase when she sees him dressed in leathers and wielding a singletail whip in his playroom.  Could her fears be linked to the scars and welts which Travis noticed on her body?  She refuses to tell them much about herself, although her nightmares and scars are a sure indication that the girl’s in big trouble.
Terrified, Brooke rushes off, intending to leave town, but is persuaded by one of the ranch hands to stay at the hotel for the night until the storm passes.  While Kent and Travis worry about her, and try to figure out how to get her back, Brooke discovers more about the BDSM lifestyle    The guys find her in the local BDSM Club, where her impression of them alters and she is obviously attracted to them.  But Kent asks questions again and they lose their chance to ask her out before the local billionaire's son approaches her.
How can they compete with a billionaire, and is there any hope of ever reconciling their relationship with Brooke now that she’s found someone else, anyhow?
When it is later disclosed that Kent Freeman is the local Deputy Sheriff, it seems like the last straw for Brooke, especially when she discovers that he has found out about her past and the real reason she is on the run.  Can she ever trust them again? And when disaster strikes at the ranch, how can they ever stop her from leaving town?

Hope you have a great week, and thank you so much for stopping by!