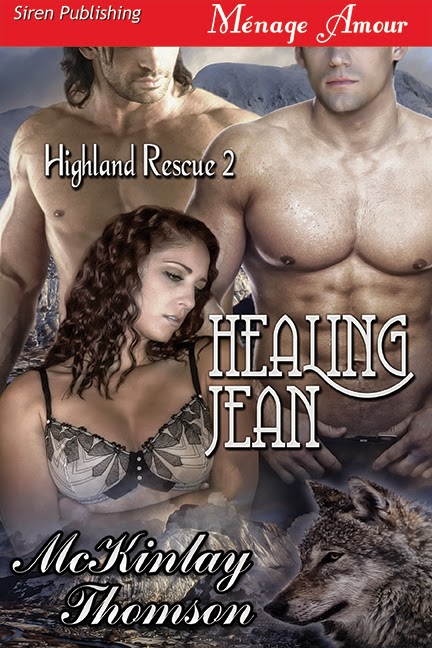 “Why do you keep doing that?” she asked, looking over her shoulder at Pherson. He kept grabbing her wrist and holding his fingers over her pulse. It was annoying and Jean wanted him to stop doing it.
“I’m checking your pulse rate,” he replied. “It is beating too fast and I want to keep an eye on it.”
“There are more interesting places to take my pulse,” she told him, lolling her head back. She pushed against him and tried to rub her ass against the middle of his thighs, but when she did, she moved her foot and pain shot through her ankle and up her leg.
“Ow,” she cried. “That really hurt.”
“Try to be still, lass,” Logan said. “We are just about to touchdown.”
“I hate pain,” she told them, and it was true. She had always been a sook when it came to hurting herself. She had a really low pain tolerance and wasn’t afraid to admit it.
The helicopter landed with a small bump and the sliding door was pulled open by a man wearing scrubs. He had a gurney behind him and two more scrub-wearing men waiting for her.
“Don’t move her,” Logan said. “I’ll lift her onto the gurney.”
“Whatever, man,” the scrub-wearing guy said. “Make it quick. It’s freezing up here.”
Jean braced herself as Logan scooped her up into his arms. He carefully backed out of the helicopter and walked towards the gurney. The wind from the blades whipped her hair around and the cold hit her face. She wrapped her arms around his neck and clung to his warm body.
“I suppose this is goodbye, then,” she said. Jean was sure that they wouldn’t come into the hospital with her no matter how much she wanted them to. They had jobs and lives and probably had girlfriends, too.
“You can’t get rid of us that easy,” he said, smiling down at her. Jean felt her heart race more and she almost felt giddy.
Pherson jumped down from the helicopter and slide the door shut behind him. Once Logan had her placed on the gurney, she untangled her arms and they raced away from the chopper and its blades.
When they burst through the hospital doors, she was surrounded by warmth and the smells of the clean hospital. She had always hated hospitals. The smell reminded her of sickness and death.
It wasn’t a nice thing to feel and she always felt guilty. Doctors and nurses tried hard to save people and make them better, and she knew things would be much worse without them, but there was something about the whole place that made her want to leave as soon as she entered.
Maybe it was some childhood experience that she didn’t remember, or maybe she just hated hospitals the way people hated crowds, no real valid reason, they just did.
They quickly went down a corridor and into an elevator before entering another corridor and followed it through a maze of other corridors. When they finally reached emergency, the gurney was pushed into an empty bay and the three men turned and left.
Jean looked up at Logan and Pherson standing by the bed. She wanted to say something, but words weren’t connecting with her brain any longer. She was fatigued and in pain and nearly past the point of holding it all together. She wanted to ball, but not in front of her two rescuers.
“The doctor will be here soon, sweetheart,” Logan said, and all she could do was nod.
As if on cue, a young female doctor walked into the bay and pulled the curtain closed behind her. Jean watched as she looked at her file and then over at Logan and Pherson.
“Which one of you filled out the paperwork?” she asked.
“I did,” Logan replied.
“You haven’t written her name or age or anything,” she snapped. Jean wanted to snap at her to leave her men alone, but when she tried, nothing came out.
“I don’t know her name,” he replied cordially. “She wouldn’t tell me. All the important info is there.”
“Fine,” she said. “You may leave.”
The doctor dismissed them and Jean felt a moment of panic. She didn’t want them to go anywhere, she was sure she still needed them. She just couldn’t think for what.
“We go nowhere,” Pherson said. His voice was low and dangerous and it made Jean happy. Take that, doctor bitch, she thought.
The woman looked at them, but didn’t argue as she went about her business. She looked at Jean’s ankle and started to gently undo the bandage. Jean sucked in a breath as pain shot through her leg.
“You’re hurting her,” Pherson snapped. “Be careful.”
“I’m sorry,” the doctor replied. “I am being as gentle as I can, but there is no real way to inspect the injury without touching her. I will give her some more pain relief.”
Jean wanted to argue. She was doped up enough. The doctor gave her another injection and she mumbled in protest. She didn’t like the sick feeling the drug gave her and hated not being in control of her body.
She felt her eyes drifting shut as the drugs took effect. She knew she had to tell them something, and it was on the tip of her tongue. She was having such trouble keeping her thoughts together and then it hit her.
“Jean,” she said. “My name is Jean.” And she was out.

Pherson pulled and tugged on Jean’s nipples and ground his hard length against her back. She was such a passionate little thing and so responsive to their touch.
Logan was kissing her with a passion he had never seen coming from his older brother. He drank from Jean’s lips like a man possessed, dominating and using her lips for their mutual pleasure.
Pherson stripped the rest of the shirt from her body, leaving her in her panties. She had been unable to put on pants because of her cast, which only made his job easier when trying to get her naked. Her cast was going to be a challenge. The brothers didn’t want to hurt her by bumping her broken ankle.
Pherson grabbed the side of her flimsy little panties and ripped them from her body, drawing a sharp breath from her and causing her to break the kiss with Logan.
“What? Err…” she stammered. “Oh, I…Pherson!”
He didn’t reply to her outraged spluttering and gently scooped her up into his arm, carrying her to the bed. Laying her down, he stood back to admire her naked form. The cast made him growl deep in his throat. He hated to see her injured and wanted to take away her pain.
“Did you just growl?” Jean asked, trying to cover her naked body with her hands. He reached down and snatched her hands away from her body.
“Don’t hide yourself from us, hen,” he told her. “You are beautiful and we want to see all of you.”
“He does that,” Logan added. “You’ll get used to it.”
Pherson gently pulled her legs apart, moving her cast leg aside with care and exposing her sex to their gaze. Her pink lips were covered in her juices and her clit shone as it peaked out from its hood. She had very little hair, just a small reddish brown landing strip, and Pherson felt himself growling once more. Only this time it wasn’t in anger, but with lust.
Pherson felt his control slipping with his woman laid out like a sexual buffet before him. He pulled the clothes from his body and saw his brother doing the same beside him.
“Fuck, hen,” he said, falling onto the bed between her legs. “You are so sexy. I can’t wait to taste you.” His face was inched from her pussy and he sucked in a deep breath, taking her scent into his lungs. She smelt sweet and musky, and uniquely Jean.
Pherson watched as a now very naked Logan slipped onto the bed beside Jean and she looked over his form. Her eyes lingered on his hard cock and he smiled as her mouth fell open.
“Like what you see, lass?” Logan asked her. Pherson saw her gulp, her eyes darting back and forth between Logan’s face and then back to his firm length.
“I…um…it’s huge,” she said, causing them both to chuckle. They were both stupidly proud of the size of their large cocks.
“Don’t worry,” Pherson said. “We were made for you. It’ll fit.”
If she was confused by his comment, she didn’t say, just continued to stare at Logan in fascination.
Pherson had been patient long enough. Dipping his head, Pherson swiped his tongue from the bottom of her slit to the tip, circling her clit and making her jump.
“Sweet heavens,” she cried. “Don’t stop.”
Pherson dived in, sucking her dewy pearl into his mouth and running the flat of his tongue over it again and again.
Logan moved forward and took her mouth once more. He cupped her mounds, playing with her nipples while Pherson paid homage to her sweet pussy. Jean withered and moaned beneath them and Pherson knew she was close to orgasm.
He wanted to give that to her. He wanted to be the man that drove her mad with desire and need. He wanted her to depend on them for her needs, sexual and otherwise, and crave only what they could give her.
“Oh god, yes, oh yes, right there.”
Jean was so close, Pherson decided he wouldn’t make her wait. He thrust his finger into her wet and waiting channel and bit down gently on her swollen clit at the same time. Jean screamed her release, her high-pitched wail piecing his ear drums as her first orgasm with them swept through her body.
Pherson felt her channel squeeze and pulse against his fingers. She lifted her hips up and rode out her release as he gently thrust into her. She was amazingly responsive to their touch and Pherson wanted to be the one to please her always.
“Beautiful,” Logan said, sucking her nipple into his mouth.
“That was amazing,” Jean said.
“It’s not over yet, hen,” Pherson told her.
Logan shifted back to make room for Pherson as he moved up her body to loom over her smaller form and settle between her creamy thighs. 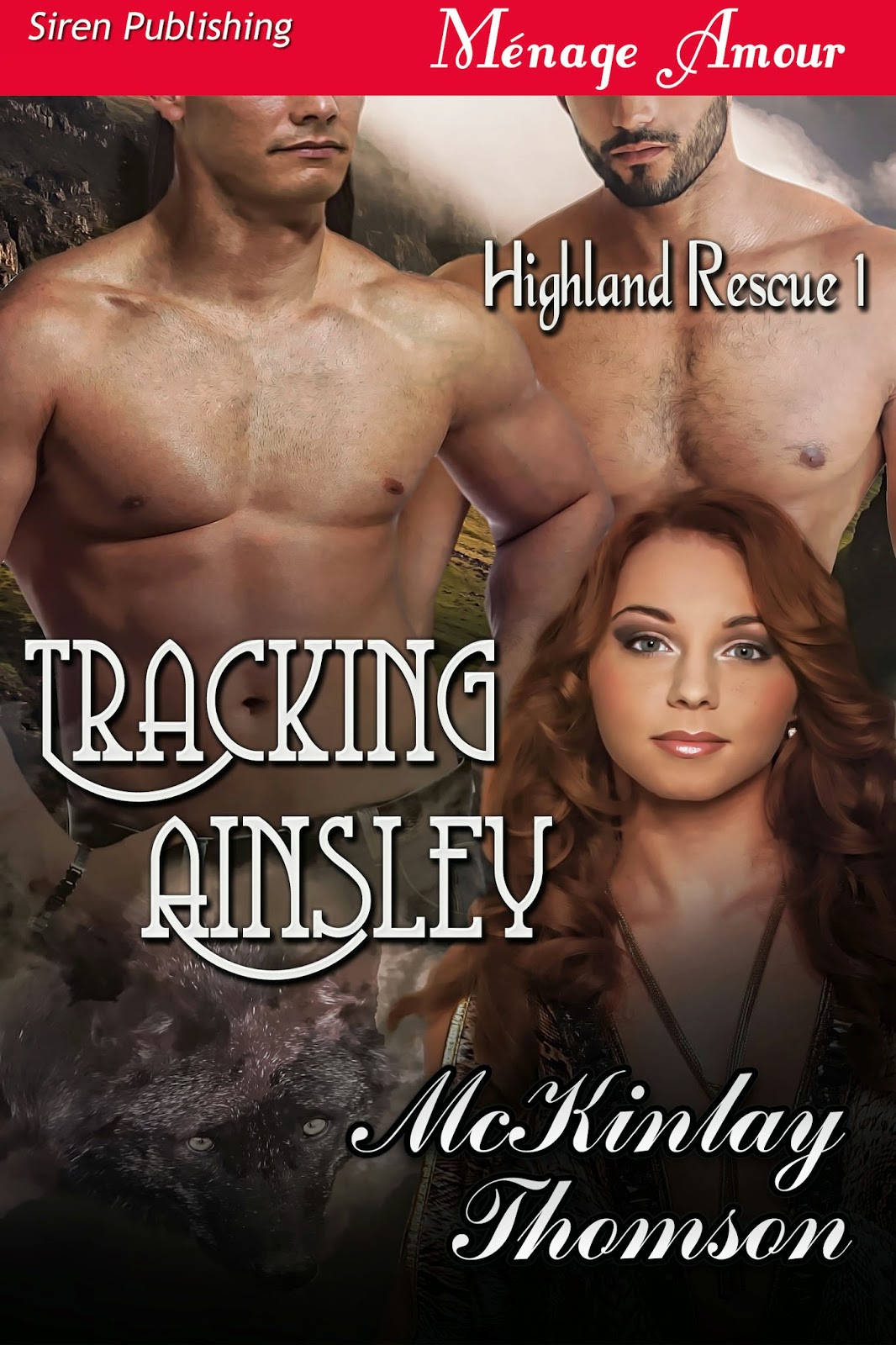 [Ménage Amour: Erotic Paranormal Ménage a Trois Romance, M/F/M, shape-shifter, HEA]
Ainsley Gordon has never been much for adventure and the outdoors, so why she ever let her friend convince her to go hiking in the highlands of Scotland is beyond her. When a storm moves in and a tragic accident befalls her friend, they are well and truly stuck and in desperate need of rescuing.
Conall and Finlay Breckenridge are wolf shifters and members of an elite squad called Highland Rescue. They operate in the harsh and dangerous wilderness of the highlands, saving stranded and injured travelers. When they receive a call to rescue two hikers, they never expected to find their mate.
The weather takes a turn for the worst, leaving the brothers no option but to take Ainsley to a remote cabin and wait out the storm. But when a rival pack bent on revenge find them, can the two sexy wolf shifters convince Ainsley to trust them with more than just her heart?