So excited to share with you my latest release! Maggie's Man is the second in The Cowboys of Cavern County series. 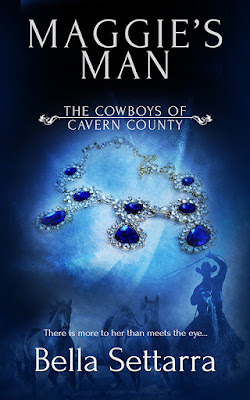 Maggie Welch lives in a crummy apartment while working in a run-down café in Bracken Ridge, Cavern County. Her days have recently been brightened by the handsome cowboy who has started to frequent her workplace. Unfortunately, Aiden Fielding, the wealthy rancher, can’t be anything more than a friend, though, as her demise in social standing has robbed her of the confidence and money she once had.
Aiden Fielding is smitten with Maggie and enjoys her company at the café, which has recently become his regular haunt. When he finally plucks up the courage to ask her out, they have a wonderful evening, and he is impressed that, despite her current job, she is clearly much more socially adept than he had imagined. He suspects there is more to Maggie Welch than meets the eye. A crass remark, however, seems to ruin their chances of a future together and he ends up being thrown out of her apartment.  A later attempt to help Maggie ends in disaster when she is humiliated in front of his family and dinner-party guests.
Just when things had seemed to be looking up for Maggie, it has all come crashing down again. She realizes that Aiden doesn’t see her in the way she had hoped, and when she finds him entertaining her ex-fiancé, Robert Rossington, she feels that he is certainly not the gentleman she had perceived.
She knows that Rossington is a cheat and thief – the trouble is that’s only the half of it…

Tomorrow I will be sharing an excerpt or two - stay tuned...