Menage of the Siren is still on track for release on 3rd April.  Can you spot the change Siren Publishing have made to the cover? 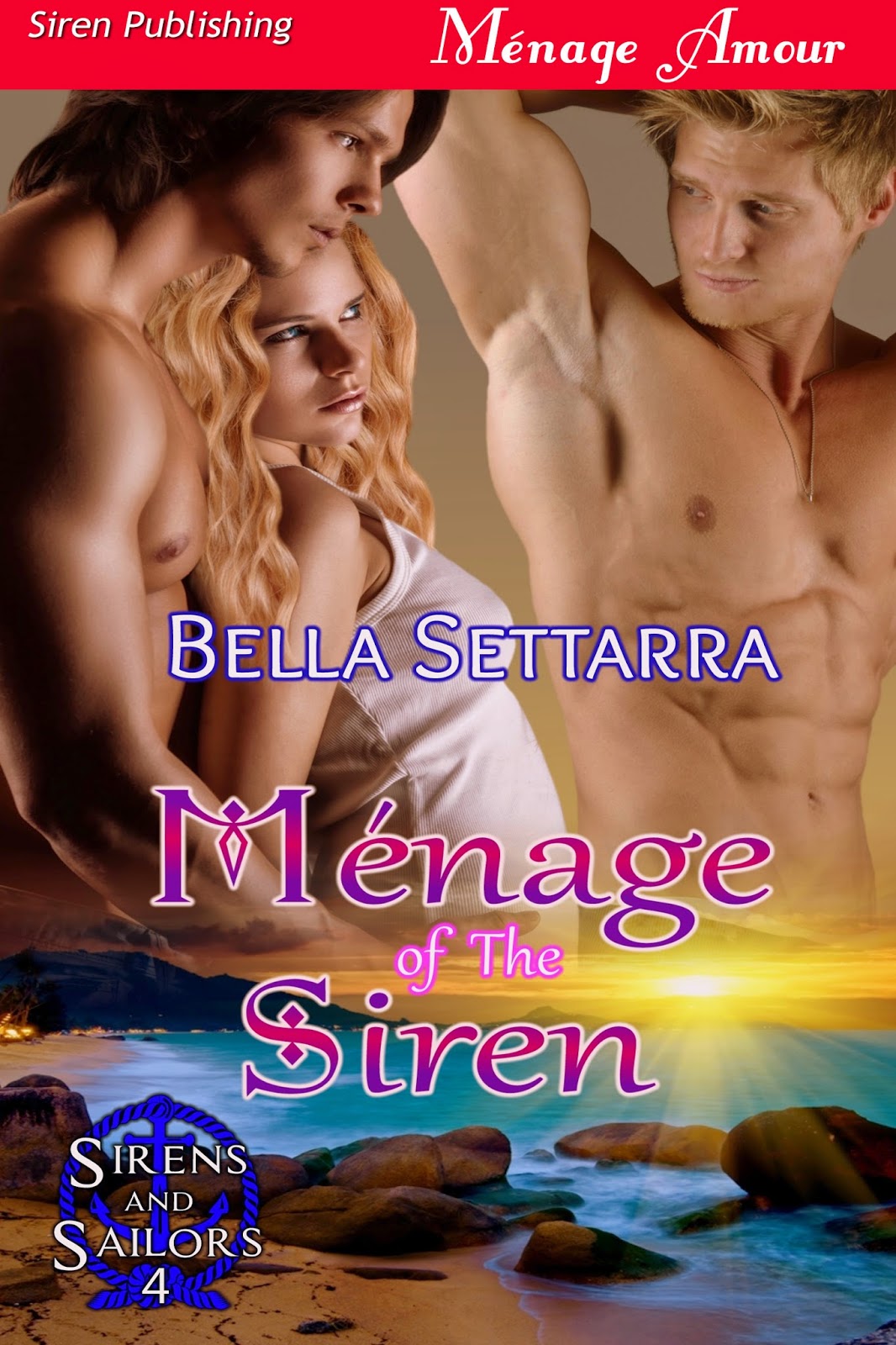 Menage of the Siren

They parted ways and Dr. Jay led the girls to the hospital. Ademia didn’t much like it there, so she was pleased to have Ligia with her. Dr. Jay was obviously very much at home in the large, white building, but it made the girls feel nervous. It was full of people scurrying about, looking important in their different uniforms. Even the patients seemed very serious.
“I just want Ademia to have a scan of that arm to make sure it’s mended properly,” Dr. Jay was telling Dr. Ernaut, a white-haired doctor with a serious expression.
“Of course, Dr. Jasun,” the older man nodded, using the doctor’s correct name. Everyone on the island knew him as Dr. Jay, which seemed a little less intimidating to the women, who weren’t used to having a medic around, much less one as large and dominant as the ship’s surgeon.
A nurse in a crisp, white uniform came to join them. She couldn’t believe her luck when she saw them arrive. Having set her sights on the handsome ship’s doctor when she first saw him, she was just waiting for the right time to make her move. She had also done her homework and learned that he was in the middle of setting up his own practice on the island of Refrainia. Although the nurse had no intention of moving to the island herself, she knew how much money was tied up in private practice, and she was very fond of money. She was also keen on promotion, and the young doctor was speaking to the one man who could easily get it for her. Two birds with one stone!
“You managed to get her fever under control then, Doctor?” she asked with a wide smile.
“Eventually,” Dr. Jay said, smiling back at the pretty nurse. “She had us worried for a while there, though.”
Ademia was becoming more than a little peeved about the way they were all talking about her as if she wasn’t there. She was even more annoyed at the way the slim young nurse was flirting with Dr. Jay, although she wasn’t about to admit it, even to herself.
“Nurse Reis will do the scan, it won’t take long,” Dr. Ernaut announced.
The nurse led Ademia into a small room while the doctors chatted outside. Ligia gave her friend a hug before finding a chair to wait on in the corridor.
“I’m just going to scan your arm,” Nurse Reis said matter-of-factly as she hauled the large blonde patient rather unceremoniously onto a bed.
Ademia bit her tongue.
“All your results are good but I think Dr. Jasun is just being thorough, given your lack of facilities on that island.” The nurse sneered as she spoke about Ademia’s home. She set up her computer before turning back to the blonde girl, who lay, seething, on the bed with her arm stretched out to one side.
“My doctor’s a very thorough man,” Ademia said bluntly.
“He is that all right,” the nurse said with a salacious grin.
Ademia’s back was well and truly up now. How dare she talk about him like that?
“Do you know Dr. Jay?” Ademia asked through gritted teeth.
“Everyone knows Dr. Jasun,” the nurse replied with a sly smile, as she ran a probe over Ademia’s arm, “But none quite as well as I do.”
“And how well do you know him?”
“Well, it’s a bit of a secret, really,” Nurse Reis went on with a smug expression, “but the handsome doctor and I are what you might call an item.”
“Is that right?” Ademia was trying hard to control her anger.
“Oh yes, though, of course, I wouldn’t expect you to understand,” the nurse continued, as she studied the monitor. “But actually Dr. Jasun and I are very much together, if you get my meaning. No, you probably don’t, do you?” She gave Ademia a superior look before resuming her work at the computer.
“That must be very difficult for you as he lives on Refrainia. He doesn’t get over to the mainland very often, and certainly not often enough to have a relationship with anyone here.” Ademia felt her heart hammering as she tried to keep a cap on her rage.
“Oh, you don’t know Dr. Jasun,” Nurse Reis gloated.
“Well I should, being as how we live together.” Ademia relished providing the information and enjoyed the look of horror on the spiteful woman’s face.
The nurse lifted the probe from her arm and stared back at the large, blonde girl in the small blue bikini. “He lives with you? But you’re so…” Luckily for her she didn’t finish her sentence. She didn’t need to.
Her incredulous tone made Ademia’s heckles rise, and she sat up angrily. Taking a deep breath she attempted to sound nonchalant as she answered the snooty nurse. “Oh yes. Didn’t he tell you? We’ve been together quite a while now. I’d be interested to see how he’s had time to have a relationship with you. We’re practically inseparable.”
Ademia relished in the stunned expression on the nurse’s face as she quickly starting shutting down her computer. Leaning over to the young woman, the blonde patient said conspiratorially, “I’m glad you’ve finished. Dr. Jay and I have…er…plans for this afternoon, if you get my meaning. Oh, no, you probably don’t, do you?” With that she heaved her ample body down from the bed and pulled her shawl around her before heading for the door.

“D’you wanna taste me, love?” Farris’s voice was deep and sexy.
She nodded, staring up as he stroked the length of his shaft. He sat back on the sofa, leaning against the arm provocatively. Ademia wasted no time in crawling over to him, and cupping his balls, she tentatively licked the liquid from the large mushroom head. The tip of her tongue found the slit at the back of his cock and she traced its line before plunging into it. He tasted deliciously salty and she lapped all around it before lathing her tongue up the whole length of the shaft.
“Go on, love,” he murmured as she relaxed her throat and engulfed his huge cock in her hot, wet mouth. Farris moaned excitedly and she felt her pussy gush again. Dr. Jay’s big finger wiped it before she became aware of his naked cock rubbing her juices up and down her folds. It was Ademia’s turn to moan as she felt the large bulbous head teasing her clit, and his hands came around her shoulders and started to stroke her massive breasts. Her nipples were tight and protruded as he rubbed them between his fingers, and he massaged her flesh lovingly.
Her breathing became more rapid as she slurped and sucked at Farris’s cock, and she felt the doctor’s massive dick begging for entry to her pussy as he lay over her back.
“OK baby?” he murmured into her ear and she nodded eagerly.
With one thrust his gigantic cock entered her dripping pussy and she gasped around Farris’s dick as she sucked even harder. Although she was no virgin, Ademia had never had a cock as big as the doctor’s before and she took a minute to adjust to his size. She revelled in the way it touched all her nerve endings, and eagerly slurped at Farris’s juices while Jay pounded into her.
As the fire increased in her belly she felt every nerve in her tingle until she screamed her orgasm around the massive cock in her mouth. The excitement threw Farris over the edge and he shot his burning seed down her open throat. At the same time Dr. Jay grunted as he came in her soaking pussy.
Ademia slumped down, her head on Farris’s stomach, as Dr. Jay lifted his weight from behind her and stood up. All three were panting loudly.
“My turn, baby.”
Farris slid out from under her and she sat up as Dr. Jay took his position on the couch. Ademia’s eyes widened as she saw the size of the cock in front of her. It couldn’t have shrunk down after he came!
The one poking at her backside felt just as big.
She took a deep breath before getting to work on the one in front. She could taste herself as well as him on it as she licked all around the head and down the shaft. She could feel his veins with her tongue, and dipped the end of it into his slit. Slurping at his juices she was surprised to hear him whisper in her ear.
“I won’t come in your mouth, baby.”
She continued to slip his massive shaft down her throat and back up and enjoyed hearing him moan.
Farris’s weight was behind her and she felt his large hands cup her breasts. He was nipping at the back of her neck, sending lovely chills down her back. She groaned as he pulled at her large nipples and muttered into her ear.
“You are so beautiful, little lady. Don’t you ever doubt that.”
She could feel his engorged cock rubbing the folds of her pussy and her tension mounted. She was so wet and ready for him to take her. She tried to concentrate on sucking at Dr. Jay’s cock, but he pulled back as pre-cum escaped the tip.
Her men must have exchanged a signal because suddenly she was lifted up and Farris was sliding back under her, pulling her lips down to meet his kiss. Dr. Jay bent her knees up and ran his finger around her neat rosette. She gasped as she realized what they had in mind, and another gush escaped her pussy. His finger delved into her hole and she gulped at the sensations
“Oh my God, Jay!”
“Hold on tight, baby.”
She grabbed Farris’s shoulders as their lips parted and she felt his cock at the mouth of her pussy.
“You ready, love?”
She nodded. A blazing fire was in her belly and she felt the wetness from her pussy. Suddenly Farris’s massive cock pushed into her and she gasped. As he withdrew, Jay’s huge cock forced its way into her ass. She had had a man up her ass before, but none as big as this. She had also never had two men at the same time like this before.
The feeling was exquisite. She felt so tight she could feel every inch of him inside her. He hit all her nerves on the way back out, too and she gasped again. No sooner had he withdrawn than Farris’s cock was thrust into her pussy again.
“Oh God!”
“OK, baby?”
“Yes..Oh yes please!”
Jay chuckled in her ear and pushed into her again. “You are so gorgeous, baby, and so damn tight!”
“Jay!”
“I wanna fuck your ass all night long, d’you know that?”
“Yes please!”
“And I never want to stop fucking your gorgeous, dripping wet pussy.” Farris’s words added to her ecstasy as she felt herself rise higher and higher.
“Fuck me!” she screamed as she came, and, gushing around Farris’s massive cock, she bit hard into his rippling chest.