I hope you had a great Easter.  As you can see I have been busy re-designing my blog – I hope you like the new look!  As promised, I will be posting more often from now on, too; twice weekly for the rest of April and then three times weekly from w/b 5th May.  This is to allow for more info and more guests.

Mondays will still concentrate on ‘Bella’s World’ – all the latest info on what I’m currently working on and any news about recent or upcoming releases.  I also aim to review books which I am currently/have recently read.

Fridays will be ‘Meet the Author’ and I hope to be interviewing and showcasing authors, and highlighting their new books.

I will let you know more about Wednesdays nearer the end of the month.

This week I’m happy to announce that the fifth book in the Sirens and Sailors Series is now on its way, 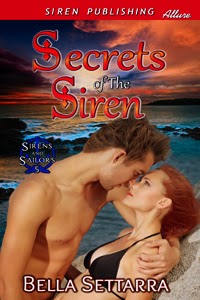 with its release due in June 2014 and then the printed version will be out in October 2014.

Beautiful Ligia is so in love with handsome sailor, Aitan, that she will do anything for him.  Unfortunately this includes hiding many of her feelings and desires from him.
While most of the men are on Eastland arranging to have electricity wired to Refrainia, pirates attack the island.  The women have to use all their wiles and prowess to save themselves.  Although the women manage to capture the pirates, their plans are thwarted when their men are delayed on the mainland and the pirates eventually manage to overpower them.
The sailors finally realize that the women shouldn’t be coerced into changing and modernising the island, but is it too late?
And when Aitan discovers all the secrets Ligia has been keeping from him he is forced to convey a ‘secret’ of his own – his dominance!  Can their love survive all their secrets or is their future doomed?

What am I working on?

I have spent the past few weeks writing a cowboy ménage, which is a big change for me.  I will let you know more about it when I get the final results.

I have also started work on the sixth Sirens and Sailors story; the last of the series (I think!)  I feel quite sad to be ending the series but I think this is the right thing to do.  I’d love to hear from you if you have any comments about that.


What have I been reading?

I love reading (and writing) cowboy stories, and one book I picked up recently was ‘Responsible Cowboy’ by Jasmine Alexander.  This is the first in her ‘James Brothers’ series, and I am sure I will be reading all of them, judging by how much I loved this book.
Here’s the book blurb and my review of it.  Incidentally I have asked Jasmine to be my guest on ‘Meet the Author’ in the near future, so look out for that!

This is such a beautiful story!  It is the tale of Roxy, a young girl who is taken in by the James family when she loses her parents.  As she grows up she grows more and more in love with Ben James, one of the brothers in the family.  When she eventually makes a move on him he spurns her and tell her he is planning to marry the bitchy Sandy, a local girl he has been seeing.  As  Roxy leaves the family home to pursue a career in nursing, Ben marries Sandy, who he believes is pregnant with his child.  After a few unhappy years for both of them, Roxy returns home to help care for Ben’s father who is taken ill.  She discovers that Ben and Sandy had a son who believes her to be his mother since Sandy left Ben shortly after his birth.  Roxy loves the son like her own and she and Ben re-ignite the flame which has been smouldering in both of them all those years.  Life looks good for them, and then Sandy appears with yet another baby!
The story is wonderfully heart-warming and beautifully written with some lovely scenes.  I can’t wait for the next book, I hope there is one for each of the James brothers as they seem a lovely bunch of guys!

I'll be back on Friday.  Hope you have a great week - enjoy whatever you're reading and writing until then.