I'm really excited to welcome back a wonderful author and a lovely lady, Kelsie Belle.  Kelsie is here to tell us about her latest release. 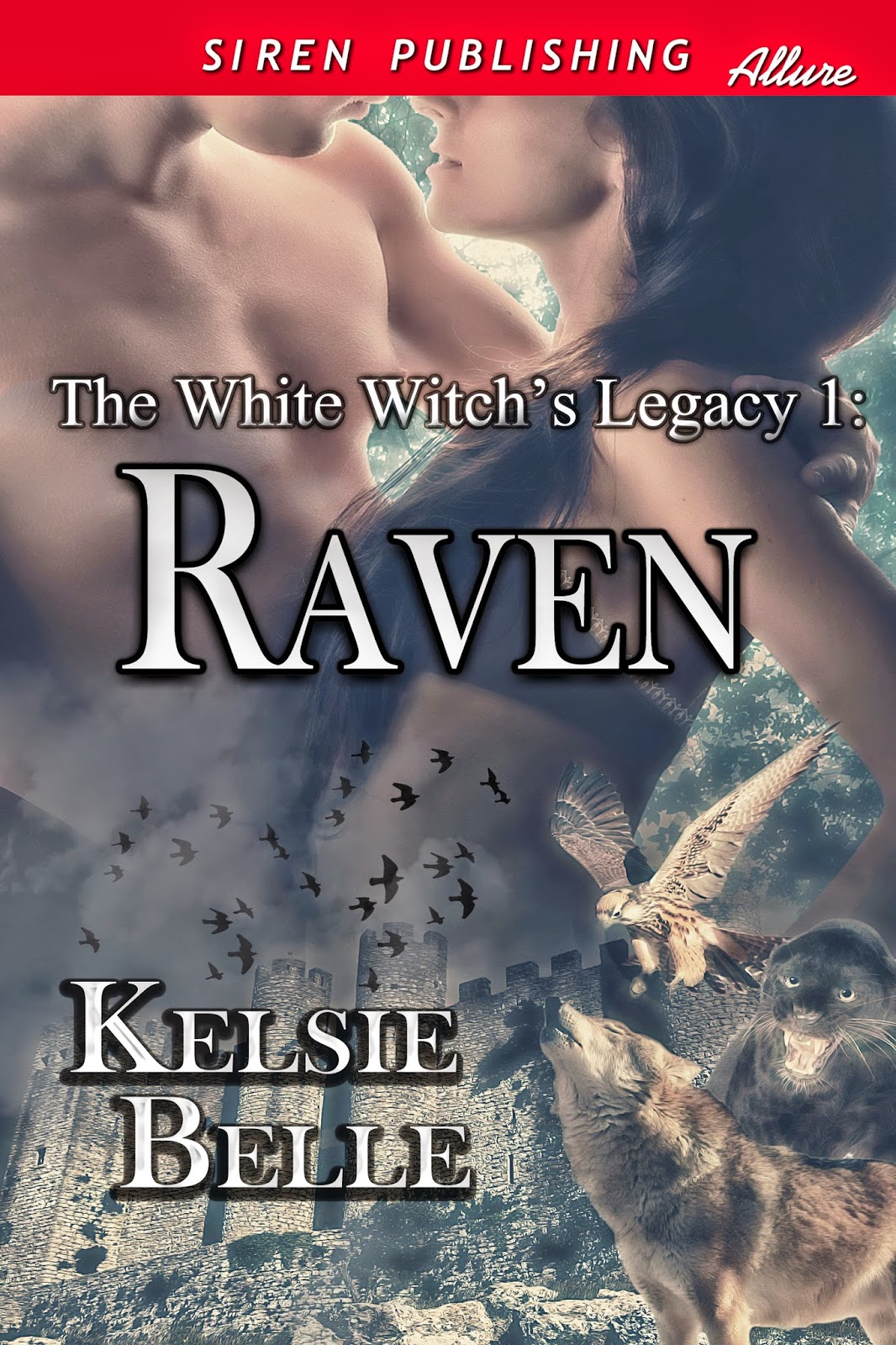 “Myra, hurry up, girl. I need you up here before the nightfall,” she said, and Myra sighed again. It was already getting dark outside so, with slumped shoulders, she made her way up the flight of rickety stairs, fully expecting a dinner of liver and onions with boiled potatoes to be waiting on her upstairs along with a game of cards.
The scene that met her as she pushed the door open and entered the apartment, however, made her freeze in the doorway, her jaw hitting the wooden floor in shock. Hazel had pushed away all the furniture to leave a wide space in the center or the living area. She had used chalk to draw an enormous star in the middle of the floor, on each point of which there was a lit candle, the flame flickering in the slight breeze that entered through the half-opened window. There were bottles of oils and essence placed on the ground beside the peculiar drawing on the floor, and a black book lay inside it. The salt-and-pepper-haired woman was busy walking around the shape and sprinkling some sort of liquid methodically onto the floor. When she noticed Myra standing dumbfounded in the doorway, she quickly put down the container she was holding and beckoned for the girl to join her where she stood. “Come girl, we don’t have time to waste! The time has come for you to meet your destiny.”
“Aunt Hazel, what is all this?” Myra asked when her wits returned to her. She took several tentative steps forward, wondering if the old woman had finally lost it after all. “I thought we were going to watch The Sound of Music again and then play cards.”
“It is your time, dear girl. Today is the day. This is what I have been preparing you for, for all these years. Come! Take your place now, it will soon begin.”
“Take my place? Where exactly is my place, aunt?” she queried cautiously, her feet still firmly rooted to the spot where she had stopped.
“You are the eldest, Myra, the first. It is you who must bear the Mark first. It will begin with you.”
As much as Hazel’s words confused the heck out of her, Myra didn’t bother to question her any further. She knew her aunt would only keep speaking in riddles so the sooner she did as she was told, the better it would be for her. Hesitantly, she walked over to where the old woman stood, and upon her instructions, she stepped over the outline of the star and went to stand in its center. Immediately, there was a whiplash of lightning, followed by a horrific roar of thunder, causing Myra to jump in fright. Where the hell had that come from? It had been a bright, clear day, no sign of rainclouds anywhere. Suddenly, all coherent thought fled her mind as a searing pain gripped the back of her neck. It felt as if someone was carving her skin with an extremely sharp object, or branding her with a hot pole. A tortured cry tore from her lips and she fell to her knees, her arms flying to the point of the pain as if she could make it stop by wiping it away.
“Yes, it has begun,” Hazel’s voice noted solemnly. She hobbled closer to where Myra knelt, clutching the back of her neck. “Let go, Myra. Accept your mark. Accept your true powers.”
Then the wind began howling outside, rushing in through the open window with the strength of a mid-summer Castallantran hurricane, so powerful that it whipped Myra’s hair about her face and roared loudly in her ears. In the midst of all this, the candles didn’t only remain lit, but they seemed to be burning even brighter still. Staring at them in shock, Myra suddenly noticed that inside each flame, there was the face of a different woman staring back at her. She gasped and made to jump to her feet, but Hazel’s hand on her shoulder restrained her.
“Do not fear, my child, no harm will come to you,” the woman reassured her, and reluctantly Myra remained kneeling as the faces in the candles’ flames began to chant together. The words were in a language Myra had never heard before. There was no way for her to understand what they meant, but somehow, she could tell exactly what they were saying.
One of three, witches that be, we grant you this day, the power to see. Strength, wisdom, and courage be yours, to find the spell caster and the other that cures.
Then, just as suddenly as it started, the howling wind stopped. The pain at the base of Myra’s neck subsided just as the flames from the candles went out simultaneously, bringing an end to the mysterious chanting, and the apartment was once again as quiet as it always was. Myra jumped to her feet, head reeling with consternation as she turned to face Hazel. The old woman just smiled and nodded before bending to retrieve the black book from the floor. When she straightened again, she handed it to Myra and then pulled her in for a tight hug. “Welcome to the sisterhood, Myra,” she whispered affectionately. “I know this is overwhelming, but I tried to prepare you the best way I could.”
Myra pulled away to look suspiciously at her eccentric aunt, her eyes darting down to the book in her hand, then back to Hazel’s face. “Aunt Hazel,” she began, her voice quivering slightly. “What just happened?”
“You finally joined the family, my dear,” her aunt replied, smiling gleefully. “You now possess one third of the powers of the Great White Witch of Castallantra.”
Myra promptly fainted.

“Don’t come.” Xander’s voice was like a battering ram slamming into her head, interrupting the intoxicating sexual high she had been experiencing.
“No!” she screamed when his lips left her sex, his head moving from between her legs.
He chuckled softly, gently easing her legs off his shoulders and rising to his feet. “I say when, beautiful, never forget that. You come when I tell you to, only when I tell you to.”
She had to bite her tongue to quell the annoyance that welled in her stomach at his words. Who the fuck did he think he was? She wanted to tell him to go fuck himself. She wanted to knee him in the groin and get the hell out of there. But when he took her hand and pulled her off the sofa, she couldn’t find the will to even resist for a moment. She was desperate for him, desperate for the pleasure she knew he could give her. Moisture seeped between her thighs when she noticed the lustful animal ferocity in his sea-blue eyes and her anticipation returned with full force. Oh God, maybe she was a whore after all!
He spun her around so that the fronts of her thighs were touching the arm of the sofa. He ran his hand over her shoulders and down her arms, reaching around to cup her breasts, as he used his body to push her forward. She was now fully bent over the sofa arm, ass held high, head lying on the soft cushions. She whimpered when one of his hands trailed a heated path along her spine to finally splay at her waist and hold her in place. His other hand delved between her thighs, easing the thong fully to the side as he sank two long, thick fingers into her body with exquisite gentleness.
“So eager, so fucking wet,” he whispered as he withdrew his fingers to fondle her clit before sinking them into her heat again. Myra couldn’t stop herself from gyrating on his hand. Her pussy clenched and gushed reflexively, loving the feel of his fingers inside her sex, wanting even more still.
“Please…please, I-I’m so...God, don’t make me beg.” Hot tears stung the back of her eyes when she heard the desperate, pathetic words that had just been uttered from her lips. How did he do this to her? How did he reduce her to nothing more than want and need without even trying?
“You don’t need to beg, beautiful, at least not tonight. Tonight I’ll freely give you what you desire, all that you desire.” He pulled back then, leaving her momentarily to quickly sheath himself with a condom. Then he was plunging into her, his powerful cock forcing its way into her tight channel, stretching her almost painful. A loud gasp escaped Myra when she felt him sinking into her. God, she’d forgotten how big he was. Jesus, he was so damn huge! She gripped the sofa for support as he filled her to capacity, inch by glorious inch.
“Christ, you feel good. So fucking good around my cock,” he rasped, his voice shaking with unleashed lust. He pulled back, sliding his cock completely out of her. She glanced over her shoulder wildly, afraid he would stop. Did he plan to just leave her hungry and desperate like this, to punish her? God, she wouldn’t survive it.
“Don’t go! Xander, please, I—”
“Shhh,” he said, and she watched as he held his magnificent cock in one hand and slowly rubbed it against her moist slit, teasing her until she was wiggling against him, pressing back to try and force him to enter her again. Then suddenly, he was at her entrance again, his thick member sliding into her like it was made to be there. She cried out as he began to fuck her steadily, pulling back and pushing in, finding a delicious rhythm that made her pussy clench and flutter.
“Yes…Jesus, yes!” she cried, curling her fingers into the cushion. Xander grabbed her hips and continued to fuck her at an almost leisurely pace, pumping into her with slow, torturous thrusts. Myra worked her hips, pushing back on him to try and get him deeper into her body.
“That’s it, beautiful, fuck me back.”

About Kelsie Belle
Kelsie Belle wears many hats – wife, mother and teacher are just a few but the erotic romance writer hat is by far her favorite. Kelsie is wildly gregarious by nature. She considers herself ‘forever 21’ and enjoys reading contemporary romance, Science fiction and fantasy, listening to music and dancing like there’s no tomorrow. A caffeine addict that lives life from one coffee mug to the next, she’s always on the go, ready and waiting for the next adventure.
She has been a storyteller for as long as she can remember, her characters live inside her overactive mind and a thousand stories come to life in her head every day. This novel is the first in her three book paranormal series The White Witch’s Legacy. It promises to be an exciting trip into her wild imagination and she hopes her readers will enjoy the experience of taking a ride outside the ordinary with her.

Thank you so much for joining me today, Kelsie, it's lovely to have you over.