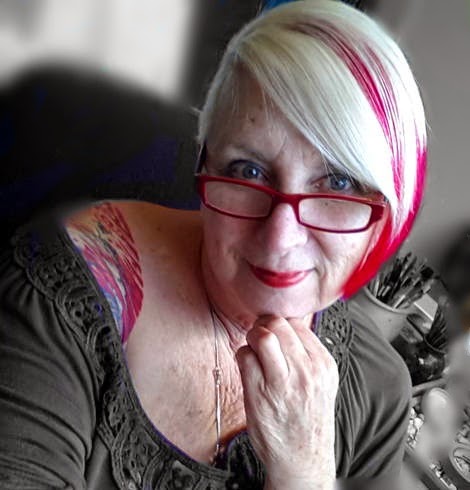 Suzy is single and lives in the Western Suburbs of Sydney, Australia with one very spoiled dog and two equally spoiled cats to keep her company.   Her books always feature older heroes and  full-figured, curvy heroines; ranging from mid 40s to 60s.
She believes that being older does not mean we are not intriguing, desirable, open to challenges and willing to experiment.  Sexy isn't just for the under 30s.

When she is not writing, she is painting. An accomplished Artist, her passion is watercolours and her subject matter ranges from portraits and animals to nudes and seascapes.
Oh yes … she also has a penchant for crazy coloured hair - pinks, purples and even rainbowed - and for tattoos!
Email: suzyshearer@optusnet.com.au                       Art website: http://sooziiiart.blogspot.com.au/ 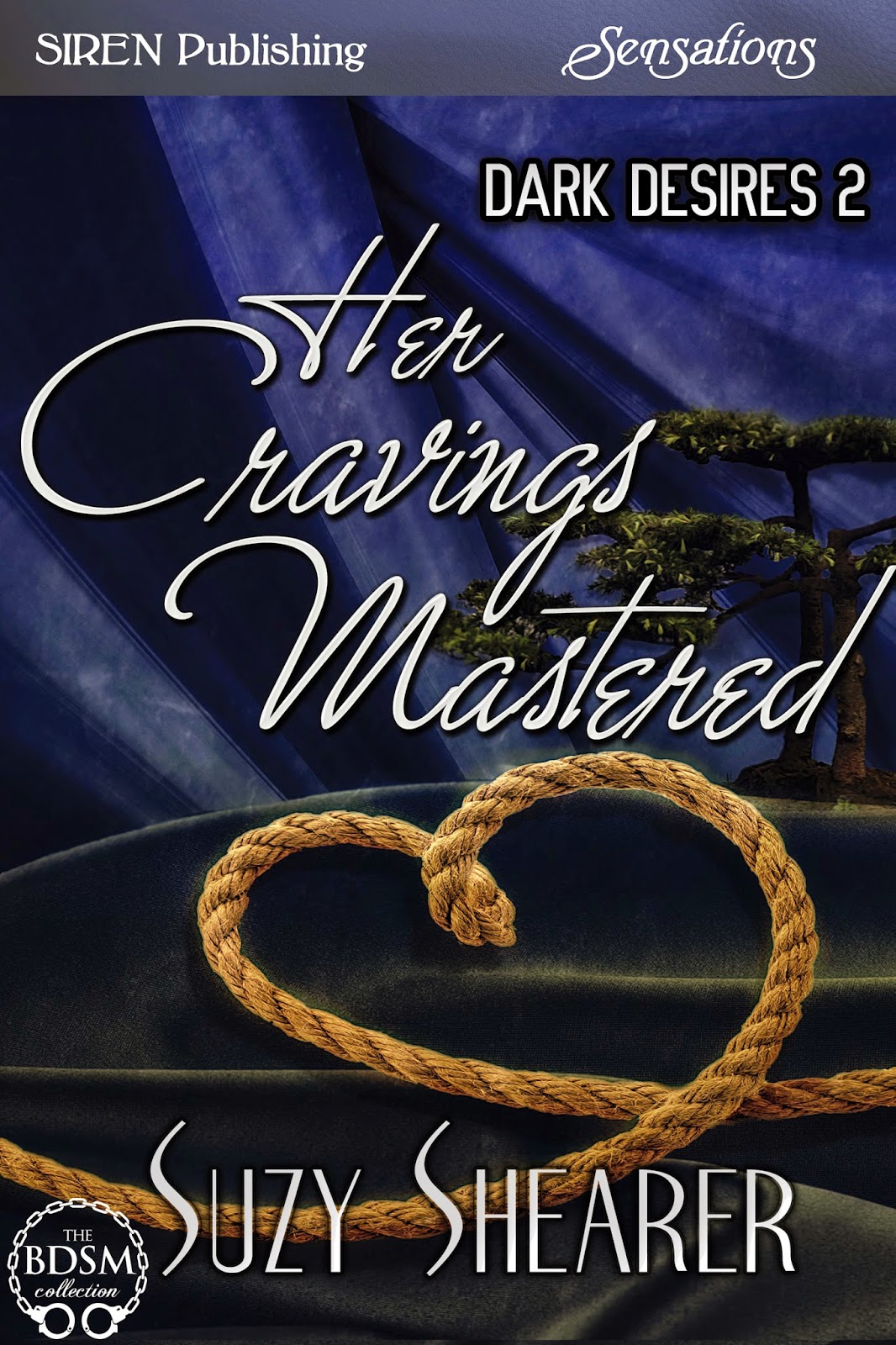 Her Cravings Mastered - released 7th March. There is 15% discount until 14th March.

For your chance to win an ecopy of Her Cravings Mastered plus an ecopy of book 1- Whipped Delights - just check out the rafflecopter at the end of this post. 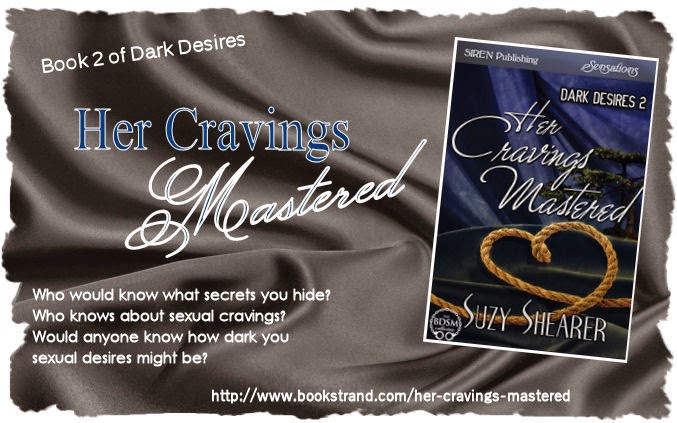 ADULT EXCERPT
He watched her face, suffused pink with arousal. The mark from the bastard almost blending with her excitement. He'd fingered her after clamping those tits. She was soaking, he loved it.
What to do to her?
He pulled a chair over, sat down and lifted one of her legs, placing her foot on the chair beside him. That was better, now he had better access, a better view. She wavered a bit as she gathered her balance but he was so proud, she hadn't opened her eyes or dropped her hands.
He only had to bend his head slightly and taste her. He loved the rich creamy taste of her. Sweet, thick. He relished her, licking and slurping as he drank her juices. She was trying to keep quiet but he could hear her soft little mewls. He grinned to himself as he drank.
He pushed two fingers inside her delightful cunt.
Looking up he caught her smile.
“Answer. Who owns this cunt?”
His voice sounded gruff to his ears.
“You, Sir!”
Tell me again.”
“You own my cunt, Sir.”
“Damn right I do!”
He spread her juices up and down from her arse cheeks to her clit. He watched her face, her eyes tightly closed. This was the final trust, the one he been working toward for many months. To have her with her eyes closed, as if she wore a blindfold.
He pushed a finger into her cunt while he went back to sucking her clit. He felt her move her pelvis closer to his mouth, He decided to ignore that transgression. With his fingers well lubricated from her, he rubbed them up and down, each time spending more and more time rubbing his thumb on her arsehole.
He wanted to prove to her being deprived of sight could be a wonderful experience. That the horrors she suffered were nothing like the delights he could give her.
She was subconsciously moving her hips more and more as his mouth continued sucking and nipping. He used his other hand to hook and rub her g-spot. Pushing one then two fingers into her. The thumb continued pressing against her arse.
He'd reminded her of her safe word, told her if she felt fear she could open her eyes and she wouldn’t be punished.
A third finger went into her cunt. He began moving them in and out, his mouth trying to match the rhythm. She held her hips close to his mouth, trying to get him to do more. He obliged. He began taping the g-spot, wriggling his fingers, pushing his tongue into her then sucking her clit.
She moaned.
That was his signal. He pushed his thumb against the tight rosette. It slid partly inside. She tensed then relaxed as his tongue and other fingers continued. A little more he pushed a little deeper in. He taken her in the arse a few times and knew how much she enjoyed it. After being reminded today of what that bastard had done to her, he wanted to remind her of how much she enjoyed having her arse filled the right way.
Her moans were getting louder. She had forgotten his order to be silent but he didn't care. He wanted this, wanted her to forget everything but her body's sensations. His thumb was into the first joint. He began moving it in and out. He changed to insert a few fingers.
She began to move in the same rhythm.
He fucked her arse with his fingers and her cunt with his fingers and mouth. She tensed, he felt her foot alongside him curl into the seat, he glanced into her face. She scrunched it up, trying to concentrate on holding back her climax. He increased the speed of his hands.
Her groans were louder now.
He knew she was beyond control. Aiden decided this was it, it was time. He gave the order.

Thank you so much for being my guest, Suzy - I, for one, will definitely be buying 'Her Craving's Mastered'! Thank you, too, reader, for joining us today, I hope you enjoyed the peek into Suzy's latest steamy book - I know I did!