Today it is my great pleasure to welcome Silke Ming with her latest release, 'Josephine Revisited'.

Q.     Who is Silke Ming?
She is a lady who loves to laugh. She knows what she wants from    life and sets out to get it. And no, I am not Chinese. This is a question that I am constantly asked.

Q.     Why did you choose the romance genre for your book?

I had always thought that these books were written by men hiding in closets somewhere. I was surprised to find out that most of the romance authors were female, who were proud of their craft.

Q.     How many romance novels have you written so far?

I think that ‘Josephine Revisited’ is my thirteenth novel. Gosh, I hope that number thirteen doesn’t mean anything superstitious.

Let me put it this way. I will not walk under a ladder, nor will I allow a black cat to cross my path and I am always wary of Friday the thirteenth. Does that make me superstitious?

Q.     What was your inspiration for your latest book, ‘Josephine Revisited?’

This is actually the sequel to a book I wrote last year. It was called ‘Possessing Josephine,’ and dealt with the topic of female genital mutilation. I decided that readers would probably be interested to know the outcome of the case that the daughter had brought against her mother.

Q.     Why did you choose the Romance genre to tackle such a sensitive subject?

It may not seem like the right platform to advocate matters as important as this, but since the romance market is geared toward females, and there are many female romance readers who have never heard of this inhumane practice perpetrated on young girls in Southeast Asia and Africa, I thought it a good idea.

Q.     When did you first hear about this practice?

I was actually on my first visit to West Africa when I heard about it. This is so ingrained in the culture, that young women are preyed upon and no one is ever prosecuted.

Q.     Do you think that speaking about it on this forum will make a difference?

Who knows? At least women who are not as fortunate as we are will be more aware of this horrible practice that is still being imposed upon women.

I am an avid gardener. As soon as the spring thaw is gone, I am one of the first persons out there trudging through the slush in the back garden. Traveling is my passion and I love cooking. I will proudly say that I consider myself a gourmet cook.

Q.     So what is your favorite cuisine?

Thai. I love the Thai flavors.

Q.     You seem to have traveled extensively. If you had to choose one place in the world where you would rather live, where would that be?

Without a doubt New Zealand. That country has the most breathtaking landscapes and the New Zealanders are the loveliest people I have ever met.

I would like to visit Cuba. I have been there on three occasions, but it was always on business, and I would like to really see it again before it changes and is over-run by tourism.

Q.       Have you any regrets about your life? Or is there anything you wanted to do or wished you had done?

I wish I had learned to play the violin. I envy people who took the time to learn the instrument and are so good at it.

I love the Austen sisters, Charlotte Bronte and Charles Dickens. I have been reading these authors’ books since I was a little girl and I have lost count of the times that I read Jane Eyre.

Q.     Lastly, Silke, what does your normal day look like?

I wake up around nine thirty in the morning, have breakfast which my husband prepares. I make lunch around two and then I start to write. We never have dinner, because lunch is usually pretty substantial. Later in the evening I watch my cooking shows and if time permits, I get my E Reader out and try to read some of the books I’ve bought and haven’t yet read. 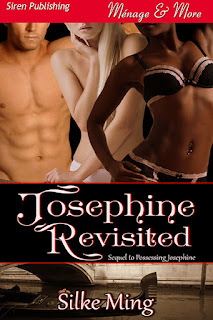 We met Josephine Fletcher and her lover Richard Schreck earlier in ‘Possessing Josephine. ’  One year later we revisit the couple in ‘Josephine Revisited,’ and find them still deeply in love, but lurking in the shadows is Richard’s ex-girlfriend, the African model known only as Willow. The case against her mother was still on-going, until word reached Richard that was a publicity stunt to keep the aging model in the limelight.
Richard takes Josephine on a trip to Venice, where for the first time, as a black woman, she feels like an equal. A chance meeting in a restaurant brings them into contact with the Italian socialite, Alessandra Graziani. Things get out of hand after they consume copious amounts of alcohol and end up in bed together. Josephine cannot forgive herself, but Richard consoles her by taking the blame. On their return to Connecticut, Richard marries Josephine much to Willow’s chagrin, because she had hoped to recapture Richard’s heart.

EXCERPT
She was angry with herself for allowing Michael to see her vulnerability. She was no longer in love with him, but seeing him brought back too many memories that she would soon rather forget. Should she tell Richard that she had seen her ex-lover? Yes. She had to be honest with him. She turned off the highway which meant she was only five minutes away from home, and the lights at the end of the long driveway and the black SUV parked at the front came into view. She felt like a traitor. But why? She hadn’t done anything wrong. Why was Michael having this effect on her, and who was the woman he was with? It was not the girl, Kimmy, who had destroyed their relationship.
Once a backstabber, always a backstabber, she whispered.
She opened the entrance door and came face-to-face with Richard, decked out in a pair of black trousers and a white shirt. He didn’t say they were going out for dinner, and he seemed to be in a strange mood. He took her hand and brought her into the foyer, took her purse and set it on the winter bench. Backing her up against the door his lips met hers in a sweet kiss. He sucked on her bottom lip and she moaned as the kindling that started the fire was now blazing throughout her body. His eyes, green and intense locked with hers, daring her to look away.
The first button of her blouse was open which was standard for her, and she watched as he slowly opened the remaining ones, finally yanking the blouse from the top of her skirt. She shuddered as his tongue washed over her shoulder, moved down her neck, swirled against the top of her breasts and over the lacy edge of her bra. Pinned against the door, her body cried out for more. He held her chin firmly in his left hand still kissing her while he skilfully released the snap of her bra with the other. Not one part of her upper body was left unscathed, as he licked it with his warm tongue. Her breasts, two plump, ebony packages of pleasure, were now the center of his attention. Her dark nipples met his lips and she gasped at the increments of pleasure that was seeping into her bones.
It was like sweet torment as he pulled one nipple between his lips, then the other, moving his head back and forth as they gazed at each other. Pulling her hips away from the door, he eased her legs apart with his foot and dropped to his knees. His fingers worked their way up and down her inner thighs inflaming the smoldering embers there, and as if to put her out of her misery, two fingers moved along the length of her wet panty-clad cleft.
“Oh God,” she gasped, as her breath escaped her lungs, leaving them almost empty. “Richard, what are you doing to me?”
Ignoring her pleas, he pushed up the front of her skirt, and brought his head to her moist center, gently licking her through the silky crotch of her underwear. She threw her head back against the door and her body danced to the movement of his tongue. Still balancing on her red stilettos, she grabbed his hair and spread her legs still wider. The skirt was now totally wrapped up around her waist, and her lacy panties he pulled over her thighs, down her legs, and onto the floor. He lifted one leg and she stepped out leaving them still dangling around the other leg, and raising his head, he came face-to-face with her swollen lips, which he held apart with his thumbs and forefingers and gripping her thighs, he restricted her movements as he traveled along the path he had grown to know so well. His tongue slowly and tortuously licked her clit, dispensing morsels of delight and bringing cries of anguish from deep within her. He nibbled on her tender flesh throwing her body into another dimension. Her knees grew weak and she bent them, widening her stance to accommodate the man she loved.
Two fingers entered her exploring her warm, wet depths while he lingered with long slow licks against her nub of pleasure. Her pelvic movements quickened and he kept licking until she shattered into a million little shards, her fingers firmly entrenched in his hair. Slowly he removed his fingers from her warm passage and lifted his head. It looked as if she was barely clinging to consciousness when he stood up and held her in his arms. She lazily opened her eyes and smiled up at him.
“A girl can get used to greetings like these,” she whispered.
“I’ll remember that, my love, but we must hurry. We have a six o’clock reservation for dinner,” he said softly.
She removed her shoes and took his hand.
“Let’s go upstairs and freshen up. You owe me one,” he said nibbling on her ear. “You can tell me about Gypsy over dinner.”
After that orgasmic welcome, she wasn’t sure if she should tell him about Michael. Why was she so afraid? There was nothing to hide, and therefore she decided she would tell him everything.

Thank you ever so much for being my guest today, Silke. It's been lovely getting to know you, good luck with your release.

Thank you for joining me as we discover another new book, please stay tuned for next time!