Today I have great pleasure in introducing you to Seelie Kay, who's latest novel, 'Hope' was released recently. In case you haven't met Seelie before, here's a little about her:

Seelie Kay is a nom de plume for a writer, editor, and author with more than 30 years of experience in law, journalism, marketing, and public relations. When she writes about love and lust in the legal world, something kinky is bound to happen!  In possession of a wicked pen and an overly inquisitive mind, Ms. Kay is the author of multiple works of fiction, including the Kinky Briefs series, the Feisty Lawyers series,The Garage Dweller, A Touchdown to Remember, The President’s Wife, and The President’s Daughter.

When not spinning her kinky tales, Ms. Kay ghostwrites nonfiction for lawyers and other professionals. She resides in a bucolic exurb outside Milwaukee, Wisconsin, where she shares a home with her son and enjoys opera, gourmet cooking, organic gardening, and an occasional bottle of red wine.

Ms. Kay is an MSwarrior and ruthlessly battles the disease on a daily basis. Her message to those diagnosed with MS:  Never give up. You define MS, it does not define you!

And a short interview to give you more insight into Seelie and her writing:

Q.  Why do you write romance?

Because I am fascinated by the games people play to find and secure a lasting relationship, which is not always love. There’s the chase, the courtship, the falling, the surrender. That’s what I try to capture in my stories.

Q.  Do you prefer a certain type of romantic hero?

Hope Ali has been a minor character in past books and has made no secret of her desire to join the Agency. She had to grow up first. Now she has and it’s time for her story. She enabled me to tackle two issues: The number of people who are “disappeared” for opposing governments and leaders, and post traumatic stress disorder. In this book, Hope helps rescue a writer in the UAE who has been put under house arrest for authoring a book exposing the ties of the ruling families to gunrunning and terrorism. Unfortunately, Hope gets attacked and is broken, mentally and physically. This very vital, strong woman must find her way back from that traumatic event and the path is not easy. It is a story of courage and survival.

Q.   How does your former profession as a lawyer impact your writing?

My friends say I am obsessed with justice and I guess that’s true. After 30 years, the law and the legal world are so firmly embedded in my brain that I can’t flush them out. That has become the lens through which I view the world and that naturally guides my characters and plots. Injustice infuriates me, but it also leads me to great stories! 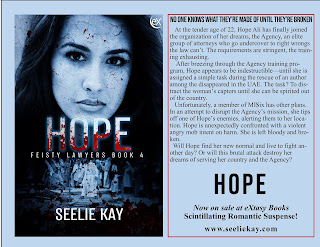 At only age twenty-two, she’s the best Probie the Agency has ever had—until her past catches up with her, leaving her devastated and broken. Without hope.

No one knows what they’re made of until they’re broken. At the tender age of twenty-two, Hope Ali has finally joined the organization of her dreams, the Agency, an elite group of attorneys who go undercover to right wrongs the law can’t. The requirements are stringent, the training exhausting.

After seeking asylum in the United States when she was sixteen, Hope and her father, Sheikh Harun Ali, settled in a quiet Wisconsin town, hiding from those who had placed a price on their heads. Still, she excelled, finishing her university and law school education by the time she was twenty-one.

Now, after breezing through the Agency training program, Hope appears to be indestructible—until she is assigned a simple task during the rescue of an author among the disappeared in the UAE. The task? To distract the woman’s captors until she can be spirited out of the country.

Unfortunately, a member of MISix has other plans. In an attempt to disrupt the Agency’s mission, she tips off one of Hope’s enemies, alerting them to her location. Hope manages to lead the author’s captors on a merry dance, freeing others to rescue her, until she is unexpectedly confronted with a violent angry mob intent on harm.

She is left bloody and broken. No one knows whether Hope’s body or her mind will heal. Suddenly Hope is no longer just her name. It is also the one thing she must embrace to find her new normal.


Excerpt:
Hope stared at the pit full of ice, then gazed at Dianna. “You want me to do what?”
Dianna smiled. “This is your new obstacle course. It’s called The Ballbuster. Obviously, the other one wasn’t challenging enough for you, so I thought we’d try something else.” She smirked. “What’s the matter, not up to it, Probie?”
Hope scowled. “I thought you were my friend.” 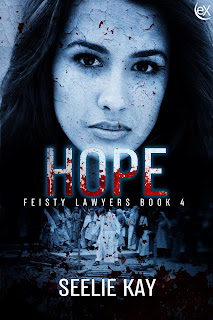 “When you’re on Agency grounds, I’m your trainer and mentor first. You know that, Hope. My job is to make sure that when in the field, you can overcome every obstacle. Failure isn’t an option. Failure could mean death.”
Hope snapped, “Don’t you think I know that? God, everyone seems duty-bound to remind me of that every damn day. I’m not a child. I know my limits. I know my weaknesses. You don’t have to bludgeon me over the head with a cudgel.”
Dianna’s expression hardened. “Here’s the thing, Hope. The second you begin to believe that you can overcome every obstacle put in front of you is the day you should quit. Confidence is one thing. Feeling that you’re omniscient is another. Out in the field, fear is what drives you, and it could very well be what saves you. I don’t need you taking stupid chances because you think you’re Wonder Woman, able to thwart every threat. I need you to calmly assess each situation and rationally weigh the risks. You need to know when to walk away. Just as you need to know when a risk is worth taking. You have no real superpowers, woman. And you need to remember that. That’s why you’re on probation until we’re confident you can survive, Probie.
“This job isn’t about physical skill. It’s about being able to clearly, quickly, and competently analyze the risks. What I see right now is a young woman without fear, willing to take on any roadblock. I need you to recognize your limits and work around them. There is no shame in admitting defeat. And there most definitely is no shame in asking for help. That’s why each obstacle has a kill bell. Hit that and the exercise stops.”
“And then what,” Hope muttered. “I get kicked out?”
“No, then we step in and help. This Agency leaves no man or woman behind, Hope. They proved that to me when I was sent to Bolivia. The minute I sent out the Bat Signal, they began putting together a team to extract me. They saved my life.”

Thanks so much for being my guest today, Seelie. It's been lovely having you here. Thanks to you, too, reader, for joining us, I hope you enjoyed taking a look at this hot new release.