Thank you for joining me today, Suzy.  I would like to start with a few questions before we find out about your latest release….

Thanks, looking forward to it.
(Me too )

Let’s start with a few questions about you:

Q.  What is your favourite food?
A.  Apart from chocolate?  Vegetarian curry or satay.

Q.  Where would be your favourite holiday destination?
A.   Somewhere away from everyone in the mountains.
(Sounds lovely!  Can I come with you???)

Q.  Who would be your perfect hero/heroine?
A.  Some gorgeous 6'8 hunk, with piercing green eyes, long straight dark hair to    his waist, muscles - oh yes ... he falls madly in love with me!

Q.  Sum yourself up in three words.
A.  Crazy, introvert, sensual.

Now I'd like to ask a little about your writing:

Q.  How many books have you written?
A.  Four that have been accepted so far, but I also have 4 more with publishers and I have my fingers crossed that they are accepted.
(Gosh – you are a busy lady!)

Q.  What kind of books do you like to read/who is your favourite author?
A.  Tough question.

Q.  Sum up your writing in three words.
A.  Sexy, quirky, different.


Author Bio:
All alone and fancy free; Suzy lives in Sydney Australia's Western Suburbs with one very spoiled dog and two equally spoiled cats to keep her company. She is still looking for that once in a lifetime love - the kind that makes your toes curl.


When she is not writing, she is painting. An accomplished Artist, her passion is watercolours and her subject matter ranges from portraits and animals to nudes and seascapes.


Suzy loves to hear from readers so stop by her website or send her an email.


Oh yes … she also has a penchant for crazy coloured hair - pinks, purples and even rainbowed - and for tattoos! 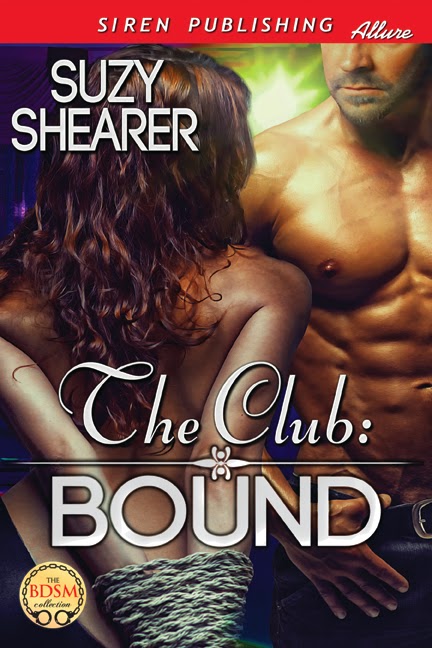 Lisa was mortified. It was bad enough that she was half-naked under the kimono, but now she was without a way home, had been grabbed, and then caused a scene. She would have to call a taxi. She felt so embarrassed by what had just occurred. She stood shakily.
“Please, sit down. I am so sorry this has happened to you. I will arrange transport for you if you wish to leave but I would really love you to stay for a while and relax.”
He signalled the barman, who came around the bar and put another drink in front of her. “Don’t worry, alcohol free.” He winked at her. “I knew the boss would fix things.”
“Thank you, thank you both. I really do not understand it. He knew when we first met that I was not interested in him except as a friend. I am so sorry to cause such trouble, I will leave.”
“No, please don’t go, and it certainly wasn’t you who caused any trouble. I would hate this experience to sour you against The Club. As for that fool, I imagine his ego didn’t like it, a very attractive woman turning him down.”
Lisa laughed. “Attractive? It is okay, you do not have to flatter me. Look, I will stay for a short while, if only to stop shaking.” They both sat.
“No flattery. You are a very beautiful and desirable woman. I doubt many men would turn down a chance to meet you.”
Just then, Fleur came over to them. “Master,” she said, bowing her head and kneeling in front of the owner.
Lisa drew a gasp and looked from one to the other. He put a hand under Fleur’s chin and told her she could relax for the moment, then leant forward, helped her stand and kissed her, then pulled her onto his lap.
“I see you’ve met Lisa. I was hoping to introduce her to you, Richard. We met in the change area. I had to put a new lace in my boot.” She held out on leg for him to see and he ran his hand along it and up across her thigh to rub her mound.
Richard waved for a drink for her as he told what had happened and Fleur looked shocked.
“How could he? She wears green! That is terrible, Lisa, trying to get you drunk. As if that was not enough, he then grabs you! Oh, Lisa, I am so sorry, especially after me telling you how safe this club is.”
“It isn’t your fault, Fleur.” Lisa had finally stopped shaking and she took a sip of her drink. “I guess I just didn’t see what he really was like.”
Fleur smiled warmly and looked up into the man’s face. “This is my husband, Richard, and this is his club. You probably made his evening, he loves to rescue fair maidens,” she joked.
Richard held out his hand and Lisa shook it saying hello and thank you. “So, Lisa, how about we start all over again and pretend you have only just arrived.”
Lisa smiled at them both, maybe it would be best to put this behind her. She would stay for a little while then grab a cab home. “That sounds like a good idea. I would love to forget what happened.”
“Would you be interested in a little tour? And importantly, are you interested in meeting up with someone?”
“A tour, yes, but not sure about meeting up with anyone. I am not interested in casual sex or anything like that. Plus, well, I imagine most of the men here are already attached and those that aren’t probably are not looking for a large over-fifty-five woman, so that puts me at a disadvantage.”
Fleur burst out laughing. “Honey, it wouldn’t matter if you were seventy or eighty. You are gorgeous with such natural sex appeal. I bet there would be at least a dozen men lining up once they see you and see you wearing green. Oh, and also just as many women.” She turned to her husband. “Isn’t she gorgeous, Richard?”
“I have already told her what a beautiful woman she is but she just doesn’t believe me. How about a little wager, Miss Lisa?”
“Wager?”
“Mmm…yes. We tour The Club and, if at the end of the tour you haven’t been approached by at least six unattached men and women then I will give you six months’ membership free.”
Lisa was stunned, she knew membership for these clubs could run into thousands but she just laughed and said, “Er…I’m not into women.”
Richard held out his hand and said, “Okay, six men. Deal?” Fleur was giggling. She nodded her head for Lisa to agree.
“I think you are both crazy. What happens if you’re wrong?”
Richard laughed. “No chance!” With that, she put her hand into Richard’s and they shook.

He poured her coffee and then his own. “I thought I was supposed to do this.”
“Never. You are not a sub, nor am I a Dom. We are two halves of a whole and I will always treat you as my equal, as my goddess. The only time I will not is during sex, when we make love it will be as equals but when we have sex, I will fuck you. Do you understand the difference?”
“Yes, I think I do.”
“Good, because I want to fuck you now, then later tonight I intend to make love to you until neither of us can stay awake. Come.” He held out his hand as he stood and they walked to the chaise. He pushed her down onto it. Her kimono fell open and when she went to pull it closed, he hit her hand.
“I want to see. Leave it.”
He pulled a chair over and sat alongside her. They talked idly for a while then he unzipped his fly. His half-erect penis burst out. She tried not to look but her eyes kept coming back to it.
“Get used to seeing it, little one, because you will be handling it a lot.”
She was sure the room was getting hot as he stood up in front of her, his cock at face level. “Kiss it,” he demanded.
She leant forward to take it in her hand but he slapped her hand away. “Kiss it.” She placed a kiss on the top then he grabbed her hair and pushed it into her mouth. She gagged a little then relaxed her throat as he thrust back and forth a few times before pulling out.
He reached down and pulled her upright. The kimono fell down her arms, and he pushed it off. He pulled her over to the St. Andrew’s Cross. “Stand there.”
She did as she was told, watching as he opened the wardrobe.
She was right, inside were ropes, paddles, whips, and a few other things. He pulled a gag out, and she screamed, “No!”
He looked at her and saw she was terrified. He went to her side. “No gags. That is fine with me,” he said and he threw it to the side.
She was shaking and he went and held her.
“I almost drowned as a child. I became caught in kelp. It was in my mouth and my nose. I can’t bear anything tied on my mouth. It reminds me of what happened and scares me.” She felt tears running down her cheeks and Paul leant forward to kiss them away.
“Little one, remember I will never do anything you don’t want.” And he kissed her and held her until she relaxed again.
“Remember the safe word. What is it?”
“Red.”
“Good girl.” He kissed both her eyes. “We will decide our own later.”
Carefully, he tied her arms and legs to the cross, and then he stood in front of her to view his handwork. He tilted the frame until she was horizontal, then locked it in place and stood alongside her. Reaching out, he pinched a nipple until she squeaked then he twisted the other. Leaning forward, he took one in his mouth and sucked then bit. Lisa moaned softly.
“Are you wet?”
She nodded. He slapped her breast. “I asked you, ‘are you wet?’”
“Yes,” she moaned.
He ran a hand across her mound then twisted his fingers into the curly red hair and pulled until she yelped. Releasing her hair, he thrust a finger into her then pushed it into her mouth. “Suck it dry.”
Lisa was moaning in excitement as he began to pinch her breast with one hand and her clit with the other. “Do you like that?”
“Yes, more. Please more.”
He slapped her between the legs and she drew a gasp. He took a small-knotted rope from the wardrobe and flicked it across her nipples until they peaked so hard she thought they would burst. He then flicked it between her legs.
Lisa lost all control and began screaming. Paul continued to flick the rope across her body until he thought she was close to orgasm. He tore open a condom and then thrust his large cock into her hard while biting her breast.


Thank you for a great interview, Suzy.   I wish you the best of luck with your future projects, and look forward to seeing you again soon.

Thanks, I enjoyed it and hope we can do it again sometime.

Next week you can find out what's happening in Bella's World on Monday, while Wednesday's Writing; The Alphabet guest stars Cait Reynolds who has endured a kidney transplant - find out how it affects her writing, and Friday Meet the Author stars Michelle Roth - find out all about her and her latest release!  Until then take care and enjoy whatever you're reading and/or writing.