'Always reach for your goals in your highest heels'

Here's a little about the book to begin with:


Liberty ‘Libby’ Lawrence adores designer labels – even though she can’t afford many. And she especially loves shoes. Her favourites are Christian Louboutins – though not those fake ones Bianca Morrison-Wright gets from the market (the red paint rubs off the soles and everything!)
She’s working as a manager (albeit junior manager) at a London hotel, when the boss announces that there has been a theft from his office. Libby couldn’t help noticing some strange marks on his carpet when she was called in for a reprimand recently (not that it was her fault, or anything) which lead her to surmise who the thief is.
Detective Sergeant James Harper, the hunky policemen who is assigned the case, seems interested in her theory – until she names her number one suspect. Libby is devastated, not only because he doesn’t believe her but – more importantly – that this guy knows NOTHING about shoes!


As Libby struggles to convince the sergeant that her hunch is right, her boss that she’s ready for promotion and herself that she’s not really falling for the gorgeous copper, she realises that maybe she’s wrong about the theft, she’s not suited to the hotel industry and that the handsome hunk is married!

I've got a host of questions to ask, so I'll just wade right in...

Q. What did you enjoy most about writing this book?

A. Best Foot Forward is one of those books that doesn't invoke huge belly-laughs, but keeps you giggling and tittering practically all the way through - at least, with my sense of humour it did. I found that as I was writing some of the scenes I couldn't stop chuckling away to myself (it's a good job I write when I'm alone). Dreaming up funny scenes and cheeky remarks put me in a really good mood and I thoroughly enjoyed writing them. It was also great fun 'researching' shoes and clothes for the book - what woman wouldn't want that job? :)

Q. Where did you get the idea from for the story? 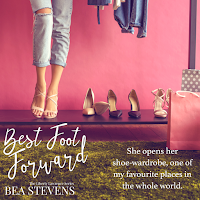 A. I love designer shoes (although, like the main character, Libby, I don't have many). I was perusing the Christian Louboutin website one evening (as you do)and was interested in an article about spotting fake ones. I was really impressed that the company goes to such lengths to try to avoid the circulation of copies of their products, and thought it would be good to weave a story around the problem. I was keen to keep it light-hearted and fun, and I hope I've achieved that.

Q. Tell us about the two main characters. 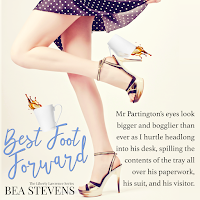 Libby Lawrence is the heroine of the story and I hope she comes across as a likeable character. She's working as a junior manager in a London hotel, and although she's not too well-suited to the role, she tries her best.
Although she has ambitions, it's not until her best friend and room-mate, Cassie, tells her she's planning to leave soon, that Libby starts to re-evaluate her own future - aided and abetted by her manager's suggestion that perhaps this isn't the right job for her, after all.
Libby gets into some unfortunate (and funny) situations - more due to bad luck than anything else - but her personality shines through and she manages to bounce back most of the time. 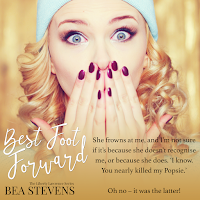 Det Sgt James Harper is called in to investigate a theft from the hotel safe. Apart from being devilishly handsome, he appears very serious and unfriendly when he first arrives at the hotel. James is intrigued by Libby, who astonishes him with her mishaps, but he warms to her as the story continues. Later it transpires that his promotion is temporary until he proves himself, and his background accounts for some of his staid manner. Libby further amazes James with her own detective-work, although he has to admit that the Metropolitan Police Force might not be the best career-choice for her!

Q. What has the response been like to your debut chick-lit novel?

A. I was thrilled with a five-star review from the fantastic chick-lit/rom-com novelist, Charlotte Fallowfield, who kindly beta-read the story for me.

it was amazing
I was lucky enough to beta read this debut chick-lit novel from Bea Stevens, and thoroughly enjoyed it. Anyone that knows me is aware that I rarely award books I read 5 stars, they really have to either move me emotionally, stay with me for days after, or make me cry either tears of laughter, or emotion. So I don't award a coveted 5 star rating often, but I had to for this gem of a British romantic comedy. Stevens has written a totally endearing heroine in Libby and you can't help but will her on to get her HEA with love interest James. With witty banter, classically British humour, and romance aplenty, you'd be forgiven for thinking that this novel follows the traditional route of a romantic comedy. However Stevens has really put some thought into some clever plot devices and twists to keep you guessing throughout, and that's what elevated this read for me. Well written with an easy reading style that just flowed, I simply loved it, and can't wait to read the next book in the series. I urge all chick-lit lovers to give this debut novel a try!
Q. Can we expect more from Libby and James?
A. Yes. Best Foot Forward left us wondering whether it was a happy ending or another misunderstanding, and the next book, Stepping It Up, teases us a little further. I don't want to give anything away, I just hope that readers enjoy the first book enough to continue on Libby's journey (in those gorgeous designer-shoes, of course).

Thanks for being my guest today, Bea, and good luck with your new release. It's been great having your company today, reader, and if you have any comments feel free to leave them below.
Bea would love you to 'like' her page on Facebook: https://www.facebook.com/AuthorBeaStevens/ 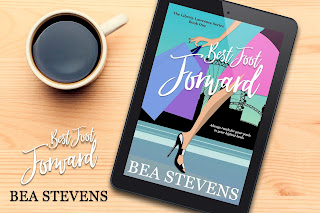