It's my great pleasure to introduce Danielle James, who's new release, Sandman, released yesterday. She's having a Giveaway, so look out for the details at the end of the excerpt. I'm definitely looking forward to reading this book, and I hope you will, too.  Take a look...

He’s the demigod of her dreams and she’s got a lineage that she can’t hide from. Will a nightmare demon steal it all away, or will these two souls find their destiny together?

Somnus spent his time walking in the dreams of others. He ghosted in and out of their lives, unseen, giving them the magic they needed to dream.

Nightmares were unusually high, so he slipped into one of his favorite charge’s dream. That’s when she saw him. Really saw him. Against all odds and against all the rules, Rachel could see him.
Rachel has something special about her, a lineage that she is unaware of, that not only draws Somnus’ attention, but the nightmare demon as well. Somnus must protect her, even from herself.

Get ready for a wild ride as Rachel and Somnus come to terms with her heritage, the demon, and their shared destiny.

Somnus stared at the child sleeping before him. He was a five-year-old with blond hair and blue eyes. The little guy had tossed and turned for an hour before he finally calmed down enough to allow sleep to claim his little body.

Somnus held out his hand and willed his magic to flow from himself to the child. It moved along the air like a cloud of golden glitter, settling on the child’s blond head. The child’s eyes began to move under their lids and a small smile lit the boy’s face. Somnus took a quick peek and saw that the boy was laughing in his dream. He was playing on a playground with other kids, running and climbing like a young boy should be. Somnus had visited the boy enough times to know that the bruises on his delicate skin were not caused by a playground accident. He took some measure of comfort knowing that if only for a short time, he could relieve the boy’s angst from his real life in a dream.

Satisfied with himself, Somnus ghosted to the next person on his list for the night. He liked his job. Giving people the ability to dream was nothing short of a necessary miracle and he did it well. Dreams allowed the mind to make sense of what happened during their waking hours. Long term memories are formed in sleep and sometimes dreams served as a means of relief from the stress of living. Like in the case of the young boy who was beaten daily by his father. Somnus would have throttled that man if he could, but as a demigod, it was forbidden for him to interfere like that. Hell, it was forbidden for him to interfere whatsoever. He could only give the person the ability to dream. Somnus could start the dream in a good place, but ultimately it was up to the dreamer as to where the dream went from where he started it. If he wasn’t aware that it would drive the father insane, he would deny him the ability to dream.  Humans, of all races, needed to dream in order to sort out their thoughts and feelings. To deny one the ability to dream long term would deny their minds the time to regroup. There would be no getting over a bad day. There would be no letting painful emotions go. After a time, the mind would short circuit and the person would go crazy. However, that wouldn’t be helpful to the boy either.

It was pushing three a.m. when Somnus arrived at the home of his most interesting charge. He liked to pretend that he didn’t wait anxiously for the tiny little signal in his brain that told him she had fallen asleep. Her name was Rachel, and every night she took the dream magic he gave her and twisted it into something terrifying. It was no wonder she barely slept, he thought to himself. He wouldn't either if he saw the things she did in dreams.

He stood over her, nothing more than a ghost in his form, watching her breathe. Her short, dark hair spiked up around her face and head in stark contrast to the white pillow case beneath her. She had long black lashes that cast the slightest shadow across her high cheekbones. His gaze followed the lines of her face down her nose to her full red lips. It wasn't bad that he knew that was the natural color of her lips at all. He pretended that he didn't feel a tug of longing in his gut as he looked at her. Somnus wanted all his charges to have good dreams, but this woman was special. Maybe it was because she had so much trouble in that area that he felt the need to help her more than the others. Maybe it was because her ability to conjure some really scary shit in her sleep intrigued him. Or maybe it was because he was a man and she was beautiful. No matter how he tried to dress it up, she was his favorite and he was a little obsessed with her. Okay, he was a lot obsessed with her.
Shaking his head, Somnus allowed his magic to flow. As the golden dream dust settled over her head, Rachel began to dream. I'll just take a quick peek, he thought, before walking into her dream.

Rachel was dancing in a rose garden, surrounded by beauty and wonder. Her eyes shined brightly; the cobalt blue reflecting the light and seeming to shimmer in the sunlight. This was what he wanted for her, Somnus thought. To be happy in her dreams, to have a little bit of peace. He watched from the edge of her subconscious, feeling better about the amount of magic he used on her with each passing minute. When she laughed aloud, the sound was like music to his ears. He had done well.
Just as he turned to leave her, Rachel's dream began to change. Dark storm clouds moved in and cluttered the sky, lightning flashed and Somnus could almost smell the ozone in the air. The entire mood of the dream changed instantly. Rachel looked confused for a moment, but then she changed as well. It was as if she had been expecting this. That was impossible, though. Humans did not have any control in their dreams. Somnus knew he should leave, but he couldn’t. He was completely mesmerized by the way Rachel prepared herself for what she knew was to come. She pulled in a deep breath as if to steel her courage, fisted her hands at her sides, and turned around to face whatever danger had come for her.

The dream did not disappoint. From the dark clouds, a form took shape. It was blurry at first, but as the clouds moved and swirled, a large figure became clear. It stood on two legs and had two arms, but that was where the resemblance to any human ended. On top of its head were two huge curved horns that curled around its head behind its pointed ears. Its skin was the color of hot coals, its eyes black and emotionless. It ran in Rachel’s direction and she screamed.

The thing looked like a demon. It ran after Rachel, snarling and slashing at her with its sharpened claws. Rachel was fast though, and kept just enough ahead of it. The scenery changed from a garden to the inner city, and Somnus watched as Rachel maneuvered through the empty streets. He knew he shouldn’t still be there, but he couldn’t help but watch. His heart pounded in his chest, waiting to see that Rachel made it out of the dream safely.

She rounded the corner of a building and came to an immediate stop right in front of Somnus. “You!” she accused. Somnus looked around to see who she was talking to. “Stop that!” she shrieked. “You know I’m talking to you. You’re always here!”

“What?” Somnus barked out. Surely he was the one dreaming. She couldn’t see him, could she?
Thunderous footsteps followed her and became louder. “We don’t have time for this,” Rachel informed him, grabbing his hand. “We have to run.”

“I don’t think so,” Somnus replied. How the hell was she touching him?

“Whatever,” Rachel told him. “It’s your funeral.” And then, she was gone. Awakened from her dream. Somnus watched as the dream world dissipated, and he was once again standing in Rachel’s bedroom. That was by far the strangest thing he had ever witnessed in the dream world.
“Why are you in my house?” Rachel demanded, sitting up and looking right at him. “You have some explaining to do. Start talking before I call the cops.”

Somnus didn’t know what to think. He was good and properly gobsmacked. This was unprecedented and he was at a complete loss. He was ghosted, but yet, she could see him. That wasn’t supposed to be possible, and yet here she was, staring him down, demanding answers. He had no clue what to say to her, but he had to start somewhere. “Why don’t we start with how the hell you can see me?” 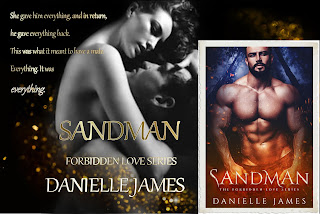 Keep in touch with Danielle at the following:

And don't forget to enter her Giveaway:
Rafflecopter Giveaway: http://www.rafflecopter.com/rafl/display/f3c2e8081/

Thanks so much for being my guest today, Danielle. And thank you, reader, for joining us. If you have any comments for Danielle please leave them in the comments below, or contact her on any of the above links.